Pacific Biosciences of California, Inc. (PACB - Free Report) , popularly known as PacBio, announced preliminary financial results for fourth-quarter 2021 on Jan 11. Following this release, shares of the company are down 15.4% till the last trading.

The company is expected to release the Q4 and 2021 results in mid-February.

As per the preliminary report, fourth-quarter revenues are likely to be about $36 million, reflecting a year-over-year improvement of 33%. The Zacks Consensus Estimate of $35.9 million remains below the preliminary figure.

During the fourth quarter, PacBio confirmed placing a record 48 Sequel II/IIe systems, up 37.1% from the year-ago period.

Preliminary service and other revenues for the fourth quarter of 2021 are expected to be approximately $4.8 million, up 37.1% from the prior-year period.

Per management, the fourth quarter reflected the company’s sustained execution of its goals. The company launched the COVID-19 surveillance solution, HiFi Viral, which is PacBio’s first kitted sequencing solution. The company also made noteworthy progress in developing its short-read sequencing platform by applying a new clustering method to facilitate a more robust workflow. Based on this early success, PacBio remains on track to launch its new short-read Sequencing by Binding (“SBB”) technology in 2023.

Per PacBio, its full-year total revenues are likely to be $130.5 million, up 65% from the comparable figure in 2020. The Zacks Consensus Estimate of $130.4 million remains below the preliminary figure.

Based on PacBio’s placement of the Sequel II/IIe systems in the fourth quarter, the company’s installed base was 374 units as of Dec 31, 2021, reflecting an improvement of 84.2% from the comparable figures in 2020.

PacBio’s impressive preliminary fourth-quarter performance projections raise our optimism. The company’s plans to launch new library prep and sequencing kits for the Sequel II/IIe platform (which will reduce DNA input requirements as well as simplify workflow) in the first half of 2022 are encouraging. PacBio’s confirmation of developing important improvements to the Sequel II/IIe platform that will be released in the first half of 2022 is also promising.

PacBio finalizing the expansion of its collaboration with Invitae Corporation to include the former’s proprietary short-read sequencing platform, Sequencing by Binding, along with its collaboration with Twist Bioscience to deliver optimized HiFi-enabled target capture workflows, are impressive. These activities further raise our optimism on the stock.

The company’s success regarding the SBB technology, along with its plans of leveraging the foundation that it built in 2021 and entering the late stages of development for multiple new sequencing platforms buoys our optimism. 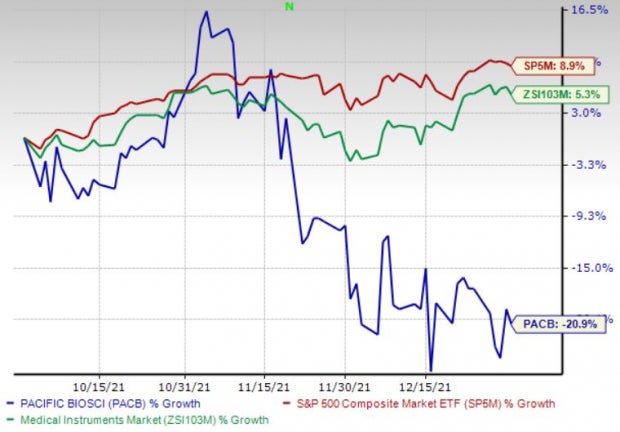 Catalent has an estimated long-term growth rate of 16.9%. CTLT’s earnings surpassed estimates in the trailing four quarters, the average surprise being 9.88%. It currently carries a Zacks Rank #2.