The deal further strengthens First Solar’s position as the largest and a reliable supplier of PV solar modules in the United States, with the company meeting the requirement of various solar developers hunting for a technologically advanced and cost-effective product for their projects.

The latest order also opens avenues for First Solar to win more such orders from Swift Current Energy in the future. This is because the Swift Current Energy’s strong pipeline of solar projects can be expected to need the highest-performing PV solar modules from FSLR.

First Solar is the largest solar module manufacturer in the United States and its continuous efforts to expand its PV solar manufacturing capacity add impetus to its growth consistently.

In this context, it is worth mentioning that as part of its endeavor to achieve its long-term goal, First Solar is investing $680 million, with an aim to expand America’s domestic PV solar manufacturing capacity by 3.3 GW annually.

The company intends to achieve this by building its third U.S. manufacturing facility in Lake Township, OH and anticipates it to be operational by the first half of 2023. Once operational, the project would inexorably expand its Northwest Ohio footprint to a total annual capacity of 6 GW, thus taking First Solar one step ahead in its long-term goal. This is likely to make it the largest fully vertically integrated solar manufacturing complex outside China.

In a bid to accomplish its objectives, First Solar is also investing and developing facilities outside the United States. In this regard, it is imperative to mention that the company is already operational with its facility units in Vietnam and Malaysia and is also eyeing investment opportunities in India, wherein the company intends to build a 3.3 GW factory. The facility is expected to be operational by the second half of 2023.

Through substantial investments in numerous projects worldwide, First Solar intends to double its nameplate manufacturing capacity to 16 GW by 2024. Such expansion plans are anticipated to support First Solar’s broader goals that will further augment its position as the prominent solar module manufacturer in the United States. This, in turn, is likely to boost its operational performance in the long haul.

Per a report from the Energy Information Administration, the United States is likely to witness an addition of 21 GW of solar PV capacity in 2022 and 25 GW in 2023. Considering growth projections of the U.S. solar market, the aforementioned initiatives of FSLR are projected to add to its operational performance in the long haul.

Solar companies who have forayed into the U.S. solar market in a bid to capitalize on solid growth prospects are:

In January 2022, Jinko Solar (JKS - Free Report) won a tender offered by the China Petroleum Engineering & Construction Corporation for up to 1.85 GW of its solar modules. The modules are scheduled to be delivered in 2022.

The Zacks Consensus Estimate for Jinko Solar’s 2022 earnings implies a growth rate of 148.9% from the prior-year figure. JKS has returned 11.2% in the past month.

In October 2021,SunPower (SPWR - Free Report) announced that it acquired Blue Raven Solar for $165 million. The buyout provides SunPower with the opportunity to expand its footprint in underpenetrated areas, including the Northwest and Mid-Atlantic regions.

The long-term earnings growth rate of SunPower is pegged at 15.6%. In the past month, shares of SPWR have returned 1.5%.

In November 2021, Canadian Solar (CSIQ - Free Report) clinched a 52-megawatt deal for the solar PV project, Caracoli, in the public auction by Colombia's Ministry of Energy. The solar PV project is expected to start construction by the second quarter of 2022 and will start delivering clean energy from 2023.

The Zacks Consensus Estimate for Canadian Solar’s 2022 earnings implies a growth rate of 201.9% from the prior-year figure. In the last reported quarter, CSIQ delivered an earnings surprise of 133.33%. 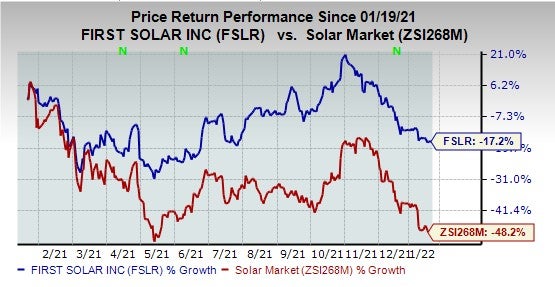