Reportedly, the widget will show users the amount of time they spend on their phone and Android applications. It will also reveal the most used applications and the number of notifications the user receives.

Further, the widget has the app timer option, by which users can set a limit on the app usage. They can also use the focus mode option to pause distracting apps.

With the help of the digital wellbeing widget, GOOGL aims to help users utilize their phone rationally and not get addicted to it.

Reportedly, the widget will be available to all Android phone users.

Google has been consistently bringing new solutions and upgrading the existing ones to offer an enhanced experience to users.

Apart from the recent move, the company introduced three updates related to Gmail, Google Meet, and Google Sheets for iPhone and iPad productivity apps. These include an email update widget for homescreen, a Picture-in-Picture feature in Google Meet and a shortcut support on Google Sheets.

In addition, it made advancements to Google Clock with five widgets, namely Analog, Digital Stacked, Stopwatch and World.

These growing initiatives by Google are expected to continue contributing well to Alphabet’s top-line growth.

Further, the growing efforts are also boosting investor confidence. The Zacks Rank #2 (Buy) company has returned 61.5% over a year, outperforming the S&P 500 index’s gain of 24.6%. 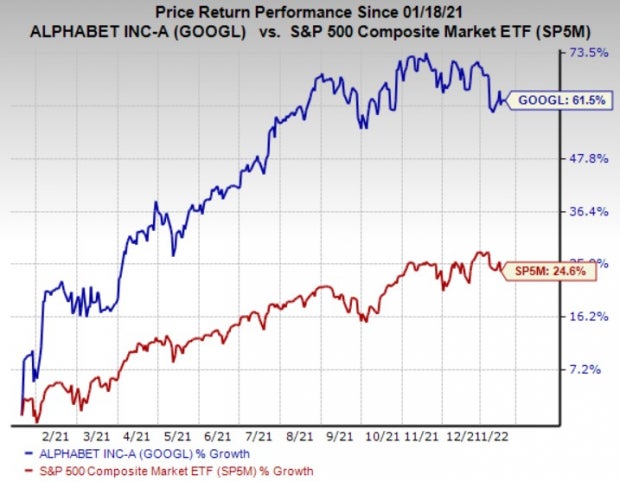 Apple (AAPL - Free Report) , which has gained 36.1% over a year, is one of the strongest peers of Google. The iPhone maker has also added digital wellbeing capabilities to its smartphones.

Apple offers a “Screen Time” option under Settings on iPhones, which features the digital wellbeing of the device. The feature reveals the time used in different applications and allows users to set time limits on certain applications.

Advanced Micro Devices has gained 55.2% over a year. The long-term earnings growth rate for AMD is currently projected at 46.2%.

Mimecast has gained 81.5% over a year. The long-term earnings growth rate for MIME is currently projected at 35%.