Per the agreement, Stripe will look after the transactions for consumer vehicle orders and reservations, as well as bundled financing options for Ford’s commercial customers. Ford also has plans to use Stripe to route a customer’s payment from its website to the correct local Ford or Lincoln dealer.

The companies have notified in a joint statement that the auto giant’s financial services arm, Ford Motor Credit Company, will utilize Stripe’s technology to process digital payments in markets across North America and Europe.

Ford expects to start rolling out Stripe’s technology in the second half of 2022, starting with North America. Later it intends to launch it in Europe.

Markedly, Stripe is the most valuable start-up in Silicon Valley, with a $95 billion valuation. The company sells software that facilitates digital payments. The firm earns its revenues by charging a small amount on each transaction it processes. Stripe has some major customers like Deliveroo, Shopify and Salesforce, but it faces intense competition from rival fintechs such as Adyen and Checkout.com. In that light, the deal with Ford undoubtedly counts for one of the biggest client wins for the digital wallet provider.

The collaboration with Stripe is part of Ford+ restructuring plan, which is an electrification and growth strategy where the company intends to invest $30 billion by 2025. The strategic decision is also in sync with the larger auto industry’s focus toward investing in technology that offers a high return on investment, benefiting the pandemic-affected industry, especially in the short run. As Ford and Lincoln are set to add a number of subscription services, the most recent one being Amazon’s Fire TV, it is a strategic move for the automaker to establish a robust digital payment platform.

Ford noted that the pandemic saw a boom in digital payment as more and more people opted for online transactions. So it focuses on carrying the momentum ahead by introducing digitalized payments offerings to its customers.

Ford was the best-performing auto stock in 2021. Last week, its market capitalization topped a whopping $100 billion for the first time. The company’s shares have soared 156.2% over the past year compared with the industry’s 6.5% rise. F’s estimated earnings growth rate for the current year is pegged at 4%. 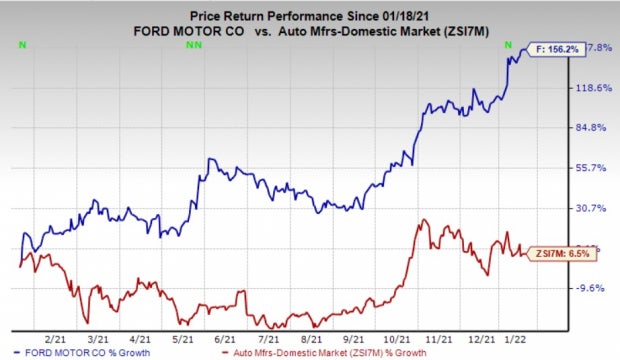 Tesla has an expected earnings growth rate of 32.7% for the current year. The Zacks Consensus Estimate for the current-year earnings has been revised around 5% upward over the past 60 days.

Tesla’s earnings beat the Zacks Consensus Estimate in three of the trailing four quarters. TSLA pulled off a trailing four-quarter earnings surprise of 25.38%, on average. The stock has also rallied 27% over a year.

Genuine Parts’ earnings beat the Zacks Consensus Estimate in all the trailing four quarters. GPC pulled off a trailing four-quarter earnings surprise of 16%, on average. Its shares have gained 35.2% over a year.

Fox Factory’s bottom line beat the Zacks Consensus Estimate in all the trailing four quarters. FOXF delivered a trailing four-quarter earnings surprise of roughly 16%, on average. The stock has rallied 19.9% over a year.