People's United Financial, Inc. is scheduled to report fourth-quarter and 2021 results on Jan 20, after market close. Its revenues and earnings are expected to have declined from the respective year-ago reported figures. 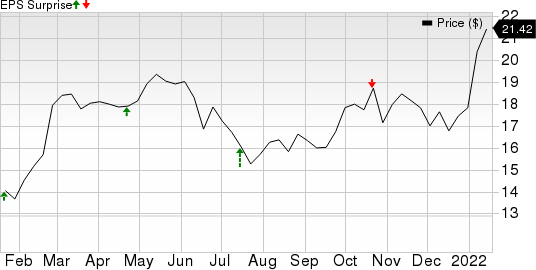 PBCT’s activities in the to-be-reported quarter were inadequate to instill analysts’ confidence. Evidently, the Zacks Consensus Estimate for fourth-quarter earnings of 30 cents has moved 3.2% south in the past 30 days. The figure indicates a 14.3% fall from the year-ago quarter’s reported figure. The consensus estimate for revenues is pegged at $458.2 million, suggesting a decline of 18.3% from the year-ago reported figure.

Loan Growth: In the fourth quarter, which is a seasonally strong quarter for loan growth, lending activity witnessed a decent acceleration, sequentially. Per the Fed’s latest data, the commercial and industrial loans and real-estate loan growth improved in the to be-reported quarter, while the consumer and commercial real estate loan portfolio were flat, sequentially.

With the majority of People's United's loan portfolio (78% as of Sep 30, 2021) comprising commercial and industrial lending as well as commercial real estate lending and equipment financing, it is likely to have obtained support in the to-be-reported quarter.

NII: A persistently low interest-rate environment is expected to have affected its NII in the quarter. Excess deposits on the bank’s balance sheet invested in low-yield investments and lower yields on the securities portfolio are likely to have kept the net interest margin (NIM) under pressure.

Fee Income:  Deposits improved in the quarter owing to stimulus-driven liquidity and higher money market balances. Continual economic recovery driving consumer activity levels is likely to have supported bank service charges for People’s United. The Zacks Consensus Estimate for the same is $25.9 million suggesting a 4.9% from the prior-year reported number.

However, the consensus estimate of $12 million for commercial banking lending fees indicates a fall of 22.6% from the year-ago reported figure. A decline in the operating lease income is also expected to have hindered overall fee income growth. The consensus estimate for total non-interest income of $101 million suggests a 43.3% decline from the prior-year reported number.

Expenses: People’s United’s expense base is likely to have risen due to higher compensation and benefits costs. Though PBCT is focused on optimizing its branch network and initiating installation of technology to improve efficiencies and reduce costs, elevated cost levels are expected to have limited the bottom-line expansion. For the quarter under review, the efficiency ratio is expected to have been 59%, indicating deterioration from the prior-year quarter’s reading of 56%. A rise in the efficiency ratio indicates lower profitability.

Our quantitative model shows that People’s United does not have the right combination of the two key ingredients — a positive Earnings ESP and Zacks Rank #3 (Hold) or higher — for increasing the odds of an earnings beat this time around.
You can uncover the best stocks to buy or sell before they’re reported with our Earnings ESP Filter.

BOK Financial (BOKF - Free Report) , Commerce Bancshares, Inc. (CBSH - Free Report) and Huntington Bancshares Incorporated (HBAN - Free Report) are a few other companies worth considering as these have the right combination of elements to beat on earnings in their upcoming releases, per our model.

BOK Financial has an Earnings ESP of +3.64% and a Zacks Rank #2 (Buy) at present. BOKF is slated to report fourth-quarter and full-year results on Jan 19.
Over the past 30 days, the Zacks Consensus Estimate for BOKF’s quarterly earnings has been revised marginally downward.

Commerce Bancshares has an Earnings ESP of +0.71% and a Zacks Rank of 3 at present. CBSH is scheduled to report quarterly numbers on Jan 19. You can see the complete list of today’s Zacks #1 (Strong Buy) Rank stocks here.

CBSH’s fourth-quarter earnings estimates have moved 1.1% north over the past month.

Huntington Bancshares is scheduled to release earnings on Jan 21. HBAN, currently a #3 Ranked player, has an Earnings ESP of +1.46%.

The Zacks Consensus Estimate for Huntington Bancshares’ fourth-quarter earnings has been unchanged over the past month.