Sales for the quarter were around $512 million, up 9% year over year. However, persistent supply-chain and labor-shortage challenges impacted the company’s ability to meet overall customer demand. This resulted in a delay of roughly $20 million of confirmed orders in late December with the majority being shipped in early January. Ashland continues to carry a large backlog of unconfirmed orders that it cannot commit to supply at this time.

The company’s adjusted EBITDA is expected to be roughly $106 million, calling for an increase of 5% from the prior year’s levels driven by higher sales, but partly offset by the delay in price versus cost-inflation recovery and the temporary government-imposed shutdown of the plant in Nanjing, China.

For the full-year guidance, the company is focused on the visibility it has and the things it can control. It expects the current pandemic impact to subside, facilitating continued end-market demand recovery. Ashland continues to undertake pricing actions which are expected to result in margin normalization. The logistics and transportation outlook remains realistic, with only modest improvement expected during the fiscal year. The cost-inflation projection and the need for future pricing actions remain uncertain, the company noted.

Based on the current inflation and pricing expectations, the company projects fiscal 2022 sales in the range of $2.25-$2.35 billion. The guidance for adjusted EBITDA in the range of $550-$570 million remains unchanged.

Shares of Ashland have gained 17% in the past year against a 1.6% fall of the industry. 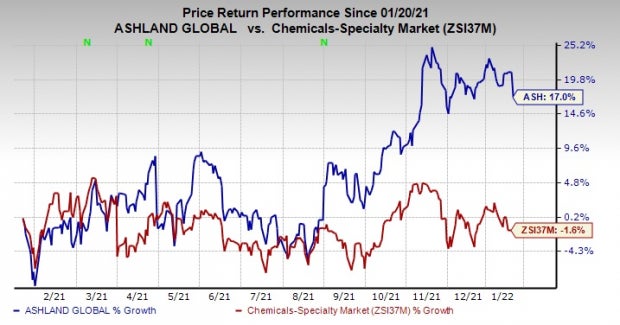 Albemarle, currently sporting a Zacks Rank #1 (Strong Buy), has an expected earnings growth rate of 51.3% for the current year. The Zacks Consensus Estimate for ALB's earnings for the current year has been revised 5.4% upward in the past 60 days. You can see the complete list of today’s Zacks #1 Rank stocks here.

Albemarle beat the Zacks Consensus Estimate for earnings in each of the trailing four quarters, with the average being 22.1%. ALB has rallied around 25.7% over a year.

Commercial Metals beat the Zacks Consensus Estimate for earnings in three of the last four quarters while missing the same once. It delivered a trailing four-quarter earnings surprise of roughly 13.1%, on average. CMC has increased around 72.2% over a year.

AdvanSix beat the Zacks Consensus Estimate for earnings in each of the trailing four quarters, with the average being 46.9%. ASIX has surged 97.1% over a year. It currently sports a Zacks Rank #1.