General Motors (GM - Free Report) , in its strive to accelerate its growth as a platform innovator, recently launched new commercial applications of its Hydrotec fuel cell technology. Hydrotec projects, which are currently in development, from heavy-duty trucks to aerospace and locomotives, are being planned for use beyond vehicles for power generation.

The fuel cell generators have the potential to replace gas- and diesel-burning generators, thus bringing down emissions. They can also offer power back up or temporarily replace grid-sourced electricity for residential and small commercial enterprises in situations of power disruption.

The U.S. auto giant is confident that with its Ultium vehicle architectures and propulsion components and Hydrotec fuel cells, it can enhance access to energy across many different industries and users while bringing down emissions.

For building the Mobile Power Generator (MPG), the company is supplying Hydrotec fuel cell power cubes to Renewable Innovations of Lindon, UT. GM’s fuel cell hardware and software will be combined with Renewable Innovations’ power integration and management systems to create a generator with the provisions of fast charging for EVs without the need to expand the grid or install permanent charging functionalities solely because of a temporary need for power.

Multiple development projects entailing the MPG are underway. This includes a demo of the technology functioning as a mobile charging station for EVs, funded partly by the Michigan Economic Development Corporation and the U.S. Army Combat Capabilities Development Command Ground Vehicle Systems Center. This version of the MPG is supposed to be first demonstrated in mid-2022.

A separate demonstration program of four additional MPGs is being funded by the California Energy Commission through its Mobile Renewable Backup Generation systems program. The project aims to show how hydrogen-based mobile power can help counterbalance the energy loss during any planned power shutoff while mitigating wildfires throughout the state.

The Electric Power Research Institute, the foremost independent, non-profit energy research and development organization, in collaboration with stakeholders like GM and Renewable Innovations, is supervising the demonstration. It seeks to ensure safe, reliable, affordable and equitable access to hydroelectricity for the public.

Renewable Innovations is enthusiastic to partner with GM over innovative technology and applications to scale up the company’s zero-emission capabilities.

Other than mobile EV charging, General Motors and Renewable innovations have joined forces on the EMPOWER rapid charger. The charger promises to help retail fuel stations add more affordable DC fast-charging capability. The rapid charger can charge more than 100 EVs before the unit needs a fresh hydrogen supply. Renewable Innovations plans to deploy 500 Empower fast chargers across the country by the end of 2025.

General Motors is developing a separate, palletized version of the MPG, which it intends to offer to defense and other customers, such as the U.S. Army Combat Capabilities Development Command Ground Vehicle Systems Center (“GVSC”). GVSC is also working on making MPG to power heavy-duty military equipment and camps. The prototype produces nearly 70% more power than traditional diesel generators.

Powered by a Hydrotec power cube, it converts off-board, bulk-stored hydrogen to electricity generated with no emissions in operation and is less noisy than a conventional diesel engine.

Renewable Innovations will produce the MPG and the larger, modular Empower rapid charger at its facilities in the Salt Lake City metro area.

Currently, General Motors carries a Zacks Rank #2 (Buy). GM’s shares have risen 2.2% over the past year against the industry’s 3.5% decline. The company has an expected earnings growth rate of 36% for the current year. 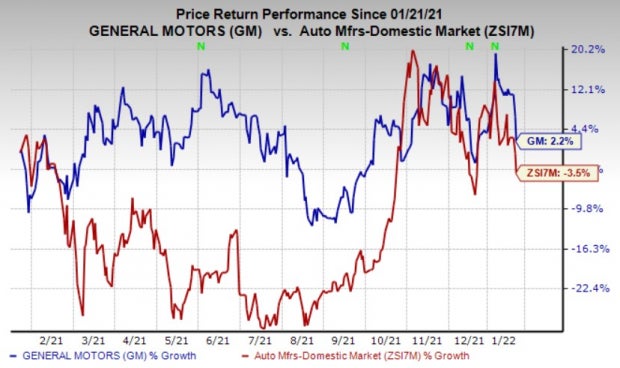 Ford has an expected earnings growth rate of 2.2% for the current year. The Zacks Consensus Estimate for current-year earnings has been revised around 2.7% upward over the past 60 days.

Ford’s earnings beat the Zacks Consensus Estimate in all of the trailing four quarters. F pulled off a trailing four-quarter earnings surprise of 335.6%, on average. The stock has also rallied 94.8% over a year.

Tesla has an expected earnings growth rate of 32.7% for the current year. The Zacks Consensus Estimate for current-year earnings has been revised around 5% upward over the past 60 days.

Tesla’s earnings beat the Zacks Consensus Estimate in three of the trailing four quarters. TSLA pulled off a trailing four-quarter earnings surprise of 25.38%, on average. The stock has also rallied 17.8% over a year.

Genuine Parts’ earnings beat the Zacks Consensus Estimate in all the trailing four quarters. GPC pulled off a trailing four-quarter earnings surprise of 16%, on average. Its shares have gained 31.4% over a year.

Here's Why You Should Retain Pool Corp (POOL) Stock Now