Methanex (MEOH) to Post Q4 Earnings: What's in the Cards?

Methanex’s shares have gained 27.8% in the past year compared with a 9.5% rise of the industry. 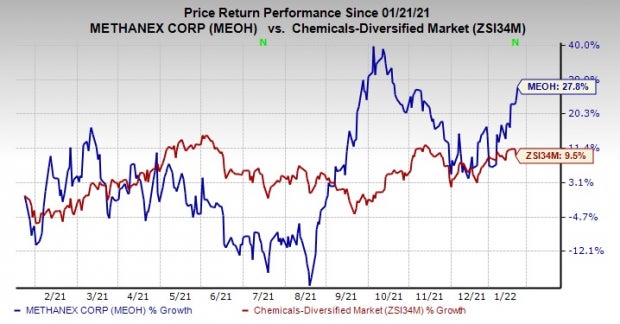 The Zacks Consensus Estimate for fourth-quarter total sales is currently pegged at $1,299 million, which reflects a 60.2% rise from the year-ago quarter’s figure.

Our proven model predicts an earnings beat for Methanex this time around. The combination of a positive Earnings ESP and a Zacks Rank #1 (Strong Buy), 2 (Buy) or 3 (Hold) increases the chances of an earnings beat.

Earnings ESP: Earnings ESP for Methanex is +0.52%. The Zacks Consensus Estimate for fourth-quarter earnings is currently pegged at $2.56. You can uncover the best stocks to buy or sell before they’re reported with our Earnings ESP Filter.

Some Factors to Watch Out For

The production resumption at its Chile 4 plant in early October 2021 is also anticipated to have ramped up Methanex’s December-quarter production.

The restart of the Motunui plant in New Zealand during late August and the benefits from the debottlenecking project are also expected to have led to higher adjusted EBITDA, sequentially, in the fourth quarter.

Here are some other companies in the basic materials space you may want to consider as our model shows these too have the right combination of elements to post an earnings beat this quarter:

Olin Corporation (OLN - Free Report) , scheduled to release earnings on Jan 27, has an Earnings ESP of +1.95% and carries a Zacks Rank #3. You can see the complete list of today’s Zacks #1 Rank stocks here.

The Zacks Consensus Estimate for Olin's fourth-quarter earnings has been revised 4.1% upward in the past 60 days. The consensus estimate for OLN’s earnings for the quarter is currently pegged at $2.53.

The consensus estimate for CF Industries' fourth-quarter earnings has been revised 31.5% upward in the past 60 days. The Zacks Consensus Estimate for CF’s earnings for the quarter stands at $3.05.

Celanese Corporation (CE - Free Report) , scheduled to release earnings on Jan 27, has an Earnings ESP of +2.98% and carries a Zacks Rank #3.

The Zacks Consensus Estimate for Celanese's fourth-quarter earnings has been revised 0.6% upward over the past 60 days. The consensus estimate for CE’s earnings for the quarter is currently pegged at $5.05.