Nevro Corp. (NVRO - Free Report) recently received the FDA’s approval for expanded labeling for its Senza Spinal Cord Stimulation (“SCS”) System associated with the treatment of non-surgical refractory back pain (“NSRBP”). The approval, which is specific to Nevro's exclusive 10 kHz Therapy, categorizes the Senza System as the only SCS system with specific labeling to treat NSRBP patients.

The FDA’s approval is backed by 12-month results for the SENZA-NSRBP randomized controlled trial (“RCT”), which was recently presented at the North American Neuromodulation Society.

The participants of the SENZA-NSRBP study indicated significant improvements in pain relief and other parameters against Conventional Medical Management (“CMM”) at 12 months post-implant. Results also included corresponding improvements for patients who shifted from CMM to 10 kHz after six months.

Significance of the Clearance

Management believes that the latest FDA approval for expanded labeling will expand access to 10 kHz Therapy for patients who suffer from intractable back pain without having undergone prior surgery, and have limited treatment options if they are not a candidate for surgery.

Following the approval of the expanded labeling, Nevro is currently the only SCS company with specific, on-label indications for treating both NSRBP and painful diabetic neuropathy (“PDN”) patients.

Per a report by Market Data Forecast, the global SCS market was estimated to be $1,871.6 million in 2020 and is anticipated to reach $2,827.4 million by the end of 2025 at a CAGR of 8.6%. Factors like rising cases of chronic and neuropathic pain, and growing adoption of SCS therapy are likely to drive the market.

Given the market potential, the latest FDA approval is expected to significantly boost Nevro’s business worldwide.

This month, Nevro announced that private health insurance company UnitedHealthcare will provide coverage for the company's high-frequency 10 kHz Therapy for the treatment of PDN for dates of service on or after Mar 1, 2022.

In November 2021, Nevro announced three important clinical data publications for treating PDN with 10 kHz Therapy, including 12-month data from the SENZA-PDN RCT published online in Diabetes Care. The company also announced real-world evidence and a comparative literature review of high versus low-frequency SCS evidence, both published in the Journal of Diabetes Science and Technology. Findings from all three studies highlight the significant benefits of HFX for PDN in clinical and real-world settings. 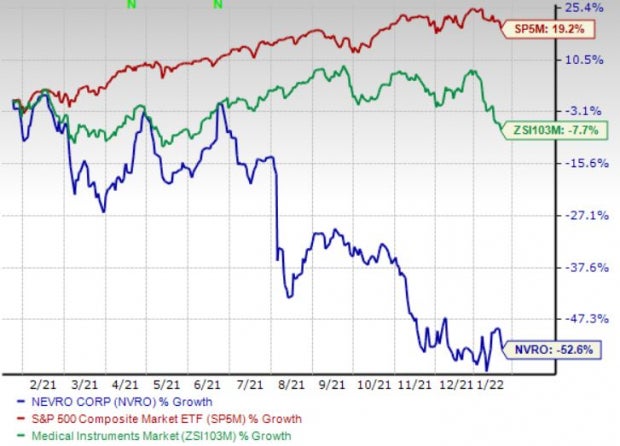 AMN Healthcare has gained 36.4% against the industry’s 59.3% fall over the past year.

Cerner, carrying a Zacks Rank #2 (Buy), has an estimated long-term growth rate of 12.8%. CERN’s earnings surpassed estimates in three of the trailing four quarters, the average surprise being 3.21%.

Catalent has an estimated long-term growth rate of 16.9%. CTLT’s earnings surpassed estimates in the trailing four quarters, the average surprise being 9.88%. It currently carries a Zacks Rank #2.