The latest approval for NGENLA in Japan follows its approval in Canada in October 2021 and in Australia in November 2021. Japan’s MHLW’s approval is expected to significantly strengthen OPKO’s position through the global sales of NGENLA, a component of the company’s broader Pharmaceuticals business.

Background of the Approval

The approval by Japan’s MHLW was backed by the results of a Phase 3 study conducted on Japanese subjects and a global Phase 3 clinical study. Both studies were conducted on subjects with pediatric GHD, which compared the efficacy and safety of once-weekly NGENLA with GENOTROPIN (somatropin) — a recombinant human growth hormone for injection, administered once daily.

Both studies demonstrated the comparable efficacy of NGENLA to GENOTROPIN in the primary endpoint of annual height growth rate at 12 months. Also, unlike GENOTROPIN, NGENLA was generally well endured in both studies with comparable safety.

Per Pfizer’s Japanese management, the recent approval for once-weekly NGENLA is expected to lead to a reduction in the burden related to daily growth hormone administration.

Per a report by Allied Market Research, the global human growth hormone market was valued at $3,864.00 million in 2020 and is projected to reach $9,211.63 million by 2030 at a CAGR of 9%. Factors like the development of recombinant human growth hormone drugs, rise in pituitary dysfunction cases, and increasing cases of growth hormone deficiency and other growth disorders are expected to drive the market.

Given the market potential, the latest approval is expected to significantly boost OPKO’s global Pharmaceuticals business.

In December 2021, the company announced preliminary top-line results from its Phase 2 trial with RAYALDEE for the treatment of mild-to-moderate COVID-19.

Also in December, OPKO received the FDA’s approval for its 4Kscore Test. The test is approved for use in men aged 45 and above who have not had a prior prostate biopsy or are biopsy negative, and have an age-specific abnormal total prostate specific antigen and/or abnormal digital rectal exam. 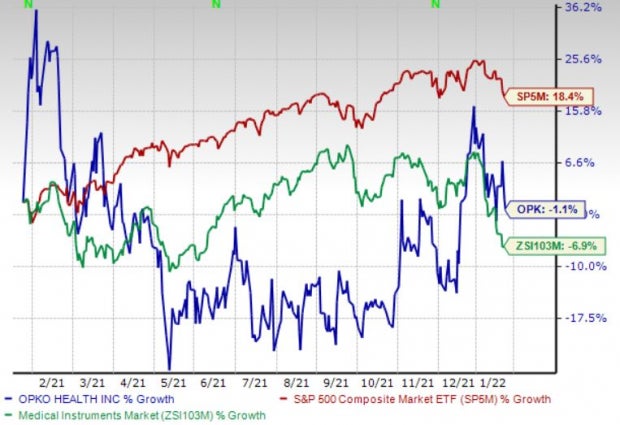 A couple of other stocks from the broader medical space that investors can consider are AMN Healthcare Services, Inc. (AMN - Free Report) and Cerner Corporation (CERN - Free Report) .

AMN Healthcare has gained 28.7% against the industry’s 60.3% fall over the past year.

Cerner, carrying a Zacks Rank #2, has an estimated long-term growth rate of 12.8%. CERN’s earnings surpassed estimates in three of the trailing four quarters, the average surprise being 3.21%.