On the fee income front, major banks’ top line received support from the solid performance of investment banking (IB) and equity trading businesses, while dismal fixed-income trading performance and weakness in mortgage banking were disappointing. Consumer banking business improved, as reflected in the increase in usage of debit/credit cards.

On the other hand, as major banks continued to spend heavily on technology upgrades and undertook efforts to streamline operations, expenses rose during the quarter. Also, a rise in compensation and benefit costs led to higher costs. Further, management commentary surrounding expenses disappointed investors, leading to a pessimistic stance.

This, along with bearish sentiments across the broader markets, weighed heavily on major banks’ share price movement over the past four trading sessions.

Re-cap of the Week’s Important Earnings

However, disappointing trading performance, lower interest rates and an increase in operating expenses were the major headwinds for JPMorgan’s quarterly results. Also, the company’s mortgage fees and related income plunged during the quarter.

2. Citigroup delivered an earnings surprise of 5.04% in fourth-quarter 2021. Income from continuing operations per share of $1.46 beat the Zacks Consensus Estimate of $1.39. However, the reported figure declined 24% from the prior-year quarter.

Improved IB and other asset-based fees and strong equity gains in WFC’s affiliated venture capital and private equity businesses, as well as lower costs, supported the bank’s performance. Yet, a decline in NII due to low yields from earning assets and lower loans were the undermining factors.

4. Bank of America’s fourth-quarter 2021 earnings of 82 cents per share beat the Zacks Consensus Estimate of 76 cents. The bottom line compared favorably with 59 cents earned in the prior-year quarter. Results in the quarter included a net reserve release of $851 million.

5. PNC Financial pulled off a fourth-quarter 2021 earnings surprise of 1.94% on substantial recapturing of credit losses. Earnings per share, as adjusted (excluding pre-tax integration costs related to the BBVA USA acquisition), of $3.68 surpassed the Zacks Consensus Estimate of $3.61 and improved 12.5% year over year. 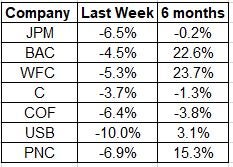 Over the past four trading sessions, shares of U.S. Bancorp plunged 10%, while that of PNC Financial tanked 6.9%.

What’s Next in the Banking Space?

Over the next five trading days, the earnings season will continue full-fledged, with a number of banks coming out with their quarterly numbers. Also, investors will watch for clues on the timing of interest rate hikes at the end of the two-day FOMC meeting, which is scheduled on Jan 25-26.