The Allstate Corporation (ALL - Free Report) projects a headwind of $411 million, pre-tax or $325 million after-tax in December 2021 related to catastrophe losses incurred in the month.

Concurrently, the property and casualty (P&C) insurer is likely to incur pre-tax catastrophe losses worth $528 million in the fourth quarter of 2021.

As the business of Allstate primarily operates within the P&C insurance line, its results remain exposed to unforeseen catastrophic events. Consequently, weather-related losses continue to elevate claims and claims expenses for Allstate and dampen its underwriting results. This has continued to weigh on ALL’s bottom-line performance for quite some time.

In the first nine months of 2021, Allstate incurred catastrophe losses of $2.8 billion, which increased 17.8% from the prior-year comparable period. As catastrophe losses rose, ALL’s claims and claims expenses escalated 29.6% in the same time frame from the prior-year comparable period. The combined ratio deteriorated 600 basis points year over year for the first nine months of 2021.

Following an active 2021 Atlantic hurricane season with 21 named storms (per the Climate Prediction Center of National Oceanic and Atmospheric Administration (NOAA)), yet another active season waits in the year 2022 as well. Hence, the bottom line of Allstate is expected to remain under pressure in the days ahead as Colorado State University’s (CSU) researchers predict an above-average season as one of the possible scenarios for the 2022 Atlantic hurricane season. The source hinted toward a 40% chance of ocean temperatures rising in the North Atlantic Ocean to an above-average level, which can result in a more intense hurricane season in 2022.

Though catastrophe losses will always be a concern for insurers due to the uncertainty of occurrence and degree of impact, Allstate remains equipped with appropriate strategies that should continue to impress investors. The company continues to minimize losses through its catastrophe management strategy and reinsurance programs.

With digitization being infused across every sphere of life due to the COVID-19 pandemic, Allstate continues to utilize new technologies and bring about process upgradations. This has extended digital competencies for ALL and resulted in enhanced efficiencies of virtual processing of claims at an accelerated pace. These initiatives have aided the company’s bottom-line results.

Shares of Allstate have gained 8.2% in a year compared with the industry’s growth of 19.8%. ALL currently carries a Zacks Rank #3 (Hold). You can see the complete list of today’s Zacks #1 Rank (Strong Buy) stocks here. 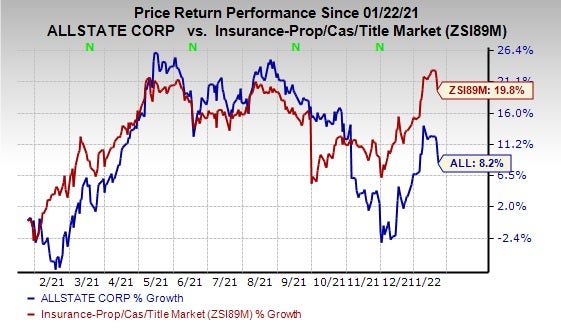 Fidelity National’s earnings surpassed estimates in each of the last four quarters, the average surprise being 38.18%. The Zacks Consensus Estimate for FNF’s 2022 earnings has moved north by 4.6% in the past 60 days. Fidelity National has a Value Score of A.

The bottom line of AXIS Capital outpaced earnings estimates in each of the last four quarters, the average surprise being 60.14%. The Zacks Consensus Estimate for AXS’s 2022 earnings suggests an improvement of 28.8% from the year-ago reported figure, while the same for revenues suggests growth of 5.9%. The consensus mark has moved north by 0.7% in the past 30 days. AXIS Capital boasts of a VGM Score of A.

Arch Capital’s earnings surpassed estimates in each of the trailing four quarters, the average surprise being 32.71%. The Zacks Consensus Estimate for ACGL’s 2022 earnings indicates a rise of 31.5% year over year, while the same for revenues suggests an improvement of 10.8%. The consensus mark has moved north by 1.2% in the past 30 days. Arch Capital boasts of an impressive VGM Score of A.