Lumakras is the only KRAS G12C inhibitor to be approved across the world.

The approval in Japan was based on data from phase II CodeBreaK 100 study that evaluated Lumakras for NSCLC in patients with the KRAS G12C mutation. Data from the same showed that treatment with once-daily Lumakras (960 mg) led to an objective response rate of 37% in the given patient population.

Shares of Amgen have decreased 9.7% in the past year compared with the industry’s decline of 37.9%. 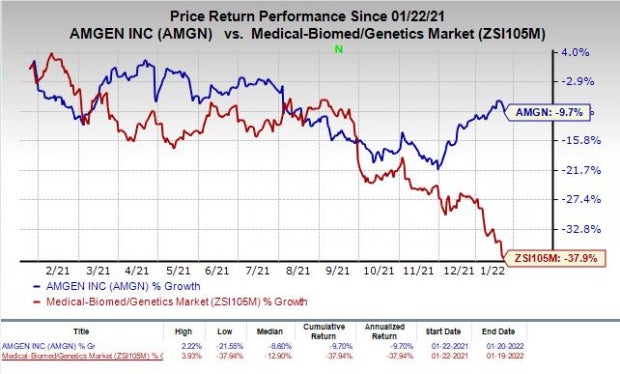 Lumykras is marketed under the trade name Lumakras in the United States.

The FDA approved Lumakras in May 2021. The approval was on an accelerated basis, with continued approval contingent on verification of data from another study to confirm the drug’s benefits. The launch of Lumakras, a first-in-class lung cancer treatment, is off to an excellent start while its label expansion studies are progressing rapidly. Lumakras generated sales worth $36 million in the third quarter of 2021.

Tumors characterized by KRAS, a common cancer mutation, are commonly associated with poor prognosis and resistance to therapy.

Amgen is exploring more than 10 sotorasib combination regimens. The company is conducting a phase II monotherapy study on sotorasib in second-line NSCLC as well as in advanced colorectal cancer (“CRC”) patients. A phase II monotherapy study in patients with KRAS G12C-mutated solid tumors, other than those suffering from NSCLC and CRC, is ongoing. A phase II study in first-line NSCLC (in patients who are either PD-L1 negative or carrying STK11 mutations) was initiated in the third quarter of 2021. A phase III study on Lumakras + Vectibix in third-line CRC is expected to begin enrollment shortly. Amgen is also conducting phase Ib combination studies with PD-1, MEK, EGFR and other targeted therapies, with some initial data expected in first half of 2022.

We note that many companies have KRAS G12C inhibitors in their pipelines being developed for various cancer indications. Mirati Therapeutics (MRTX - Free Report) is developing adagrasib, a KRAS G12C inhibitor, both as a monotherapy and in combination studies for treating patients with KRAS G12C-positive tumors.

In November 2021, Mirati initiated the submission of the new drug application for adagrasib to treat patients with previously treated KRAS G12C-mutated NSCLC.

Mirati is also developing adagrasib for other cancer indications.

Dynavax Technologies’ earnings estimates have been revised 18% upward for 2022 over the past 60 days.The stock has skyrocketed 152% in the past year

Dynavax Technologies’ earnings have surpassed estimates in each of the trailing four quarters.

Anthem (ANTM) Gears Up for Q4 Earnings: What's in the Cards?