United States Steel Corporation (X - Free Report) is scheduled to come up with its fourth-quarter 2021 results after the bell on Jan 27. Strong end-market demand and higher year-over-year steel prices are likely to have supported its fourth-quarter results. However, its shipments are expected have been affected by seasonal slowdown.

The company surpassed the Zacks Consensus Estimate in each of the trailing four quarters, the average being 24.5%. It delivered an earnings surprise of roughly 10.5% in the last reported quarter. 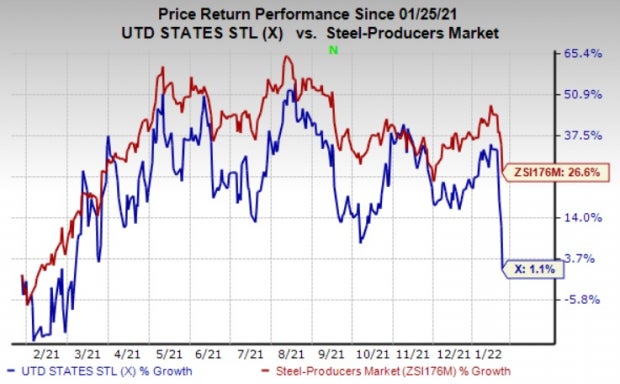 U.S. Steel, last month, issued its guidance for the fourth quarter. It envisions adjusted EBITDA of roughly $1.65 billion for the quarter.

The Zacks Consensus Estimate for revenues for U.S. Steel for the fourth quarter is currently pinned at $5,481 million, indicating a 113.9% year-over-year rise.

Moreover, the Zacks Consensus Estimate for shipments for the company’s Flat-Rolled unit for the quarter currently stands at 2,083,000 tons, reflecting a 7.7% year-over-year decline. The consensus estimate for average realized price per ton in the unit stands at $1,413, suggesting a 93.3% year-over-year increase.

The consensus estimate for shipments for the Mini Mill unit is pegged at 541,000 tons, suggesting a 11% sequential decline. The same for average realized price per ton for the unit stands at $1,622, reflecting a 6.9% sequential increase.

For the Tubular segment, the consensus estimate for shipments is pegged at 126,000 tons, reflecting a 70.3% year-over-year rise. The same for average realized price per ton for the unit stands at $1,756, calling for a 38.6% year-over-year increase.

The company’s fourth-quarter results are likely to have benefited from strong demand across end markets, higher domestic steel prices and its actions to improve cost and operating performance.

U.S. steel prices witnessed a significant rally last year, supported by strong underlying supply and demand fundamentals. However, prices have come under pressure since the beginning of the fourth quarter of 2021, partly due to rising production levels.

The benchmark hot-rolled coil (“HRC”) prices have cooled off since October after peaking in September 2021, dragged down by shorter lead times and rising supply. Despite the sharp correction from its peak levels, HRC prices remain elevated, and are well above the year-ago levels. Higher domestic steel prices are likely to have boosted the company’s selling prices and supported its bottom line in the to-be-reported quarter.

However, the company’s shipment volumes for the fourth quarter are likely to have been affected by year-end seasonality. U.S. Steel, in December, noted that it expects its volumes to be affected by cautious seasonal buying.

Our proven model does not conclusively predict an earnings beat for U.S. Steel this season. The combination of a positive Earnings ESP  and a Zacks Rank #1 (Strong Buy), 2 (Buy) or 3 (Hold) increases the chances of an earnings beat. But that’s not the case here.

Earnings ESP: Earnings ESP for U.S. Steel is -11.36%. The Zacks Consensus Estimate for earnings for the fourth quarter is currently pegged at $4.64. You can uncover the best stocks to buy or sell before they’re reported with our Earnings ESP Filter.

Here are some companies in the basic materials space you may want to consider as our model shows these have the right combination of elements to post an earnings beat this quarter:

Olin Corporation (OLN - Free Report) , scheduled to release earnings on Jan 27, has an Earnings ESP of +1.95% and carries a Zacks Rank #3. You can see the complete list of today’s Zacks #1 Rank stocks here.

The Zacks Consensus Estimate for Olin's fourth-quarter earnings has been revised 4.1% upward over the past 60 days. The consensus estimate for OLN’s earnings for the quarter is currently pegged at $2.53.

The consensus estimate for CF Industries' fourth-quarter earnings has been revised 40.1% upward over the past 60 days. The Zacks Consensus Estimate for CF’s earnings for the quarter stands at $3.25.

Celanese Corporation (CE - Free Report) , scheduled to release earnings on Jan 27, has an Earnings ESP of +2.98% and carries a Zacks Rank #3.

The Zacks Consensus Estimate for Celanese's fourth-quarter earnings has been revised 0.6% upward over the past 60 days. The consensus estimate for CE’s earnings for the quarter is currently pegged at $5.05.

PTC Gearing Up for Q1 Earnings: What is in the Offing?