Olin (OLN) to Report Q4 Earnings: What's in the Offing?

Olin Corporation (OLN - Free Report) is set to release fourth-quarter 2021 results after market close on Jan 27. The company’s productivity actions, the Lake City contract and higher prices are likely to get reflected in its fourth-quarter numbers. However, Olin is likely to have faced headwinds stemming from higher raw material costs.

Olin’s shares have surged 89.9% in the past year compared with a 4.8% rise of the industry. 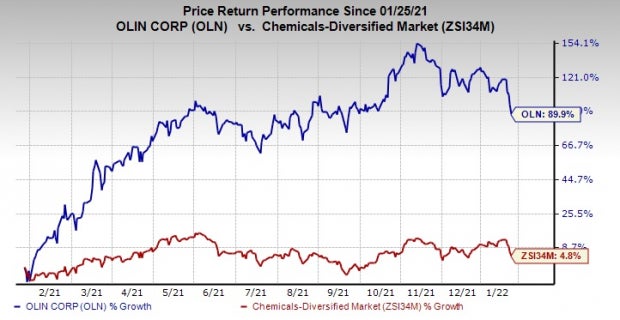 Our proven model predicts an earnings beat for Olin this season. The combination of a positive Earnings ESP and a Zacks Rank #1 (Strong Buy), 2 (Buy) or 3 (Hold) increases the chances of an earnings beat.

Earnings ESP: Earnings ESP for Olin is +1.95%. The Zacks Consensus Estimate for fourth-quarter earnings is currently pegged at $2.53. You can uncover the best stocks to buy or sell before they’re reported with our Earnings ESP Filter.

The Zacks Consensus Estimate for Olin’s revenues in the to-be-reported quarter is pegged at $2,338 million, suggesting a year-over-year increase of 41.4%.

The consensus mark for net sales in the Chlor Alkali Products and Vinyls unit is currently pegged at $1,054 million for the fourth quarter, calling for a 32.7% year-over-year increase.

The Zacks Consensus Estimate for the Winchester segment’s net sales is currently pegged at $386 million, suggesting a 13.2% rise from the year-ago quarter’s level. The same for the Epoxy division is pegged at $806 million, indicating a 55% year-over-year increase.

The Lake City U.S. Army ammunition contract is likely to have aided the performance of the company’s Winchester business. The multi-year contract is expected to have contributed to sales and profitability in the fourth quarter. The Chlor Alkali Products & Vinyls segment is likely to have gained from higher prices.

Productivity actions are likely to have contributed to fourth-quarter performance. The company expects productivity measures like plant closures as well as raw materials and railcar management to deliver $100 million of net savings for full-year 2021.

The company is expected to have faced challenges from cost-related headwinds in raw materials. It is also likely to have witnessed an impact from seasonality brought by year-end holiday slowdowns. Higher commodity costs are likely to have exerted pressure on the margins of the Winchester unit.

Here are some other companies in the basic materials space you may want to consider, as our model shows that these too have the right combination of elements to post an earnings beat this quarter:

Celanese Corporation (CE - Free Report) , scheduled to release earnings on Jan 27, has an Earnings ESP of +2.98% and carries a Zacks Rank #3.You can see the complete list of today’s Zacks #1 Rank stocks here.

The Zacks Consensus Estimate for Celanese's fourth-quarter earnings has been revised 0.6% upward in the past 60 days. The consensus estimate for CE’s earnings for the quarter is currently pegged at $5.05.

The consensus estimate for CF Industries' fourth-quarter earnings has been revised 31.5% upward in the past 60 days. The Zacks Consensus Estimate for CF’s earnings for the quarter is pegged at $3.25.

Methanex Corporation (MEOH - Free Report) , scheduled to release earnings on Jan 26, has an Earnings ESP of +0.52% and carries a Zacks Rank #3.

The Zacks Consensus Estimate for Methanex's fourth-quarter earnings has been revised 4.2% upward in the past 60 days. The consensus estimate for MEOH’s earnings for the quarter is currently pegged at $2.56.