Suncor Energy Inc. (SU - Free Report) plans to divest its oil and gas assets in Norway to potential customers, per a report by Bloomberg.

Scotiabank has been hired to divest all of Suncor’s shares in the Suncor Energy Norge AS unit, which comprises non-operated stakes in three oil and gas fields in the North and Norwegian Seas. Beside this, it involves several exploration assets in the region.

The assets on sale involve a 30% interest in the Oda field, wherein production is expected to reach 15,000 barrels of oil equivalent per day this year. The field is operated by Spirit Energy Group. The sale also involves a 17.5% stake in the Fenja project in the Norwegian Sea, with the first oil expected in the first half of 2023. Moreover, it includes a 20% non-operated interest in the Beta discovery made in 2010.

In 2020, Suncor was seeking to divest a number of oil and gas assets in the North Sea. At the time, the company’s Norway assets were valued at an estimated $100 million. Last year, Suncor divested its stake in a cluster of oil and gas fields in the U.K. North Sea to EnQuest for $325 million.

The divestiture will create an uptick in deals in the U.K. North Sea, with major oil and gas companies selling assets to a range of potential buyers. Suncor didn’t reveal a timeframe for the process. The company said that the prospective buyers would be invited to submit an indicative non-binding bid, which will be followed by a binding bid.

Shares of Suncor have underperformed the industry in the past six months. The stock has gained 25.9% compared with the industry’s 40.7% growth. 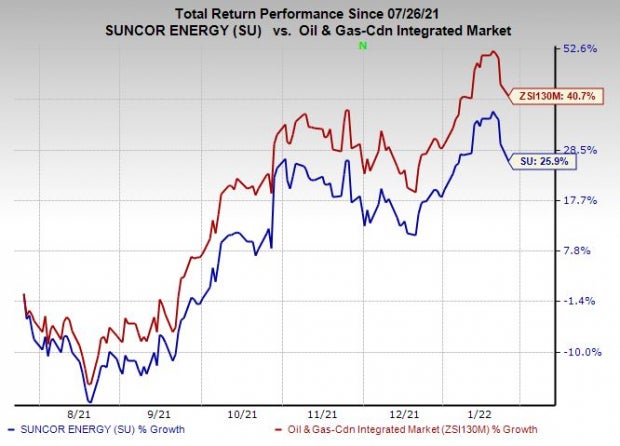 Investors interested in the energy sector might look at the following companies that presently sport a Zacks Rank #1 (Strong Buy). You can see the complete list of today’s Zacks #1 Rank stocks here.

Sunoco LP (SUN - Free Report) is a master limited partnership that engages in the distribution of motor fuel to roughly 10,000 customers, including independent dealers, commercial customers, convenience stores and distributors. In the United States, Sunoco is among the largest motor fuel distributors in the wholesale market by volume. Through 2020, the partnership sold 7.1 billion gallons of motor fuel.

Sunoco currently has a Zacks Style Score of A for both Value and Growth. SUN witnessed one upward revision in the past 60 days. For 2021, Sunoco expects fuel volumes of 7.25-7.75 billion gallons, indicating a rise from the 2020 level of 7.09 billion gallons.

Exxon Mobil Corporation (XOM - Free Report) is one of the leading integrated energy companies in the world. XOM's bellwether status in the energy space, an optimal integrated capital structure and management's track record of CAPEX discipline across the commodity price cycle make it a relatively lower-risk energy sector play. Overall, the company is not focusing aggressively on production to win back investors but instead is taking every effort to preserve shareholders’ capital, while lowering costs.

XOM's earnings for 2022 are expected to surge 21.8% year over year. On Oct 27, ExxonMobil announced its fourth-quarter dividend at 88 cents per share, indicating an increase from 87 cents in the previous quarter. Following the increase, the integrated energy giant’s annual dividend for 2021 is $3.49 per share, higher than $3.48 in 2020. Looking at the dividend history, XOM is strongly focused on returning capital to shareholders. XOM has hiked its annual dividend payment for more than 39 consecutive years.

Centennial Resource’s earnings for 2022 are expected to surge 72.7% year over year. CDEV currently has a Zacks Style Score of B for both Growth and Momentum. At the end of the September quarter, cash and cash equivalents increased to $5 million from the second-quarter level of $4.7 million.

Alphabet (GOOGL) to Post Q4 Earnings: What's in the Offing?