Ionis Pharmaceuticals, Inc. (IONS - Free Report) announced that the FDA has granted Orphan Drug designation to eplontersen, which is being developed for the treatment of transthyretin-mediated amyloidosis, a progressive and fatal condition.

The Orphan Drug designation is granted by the FDA to a drug or biologic intended to treat a rare disease or condition, which generally includes one that affects fewer than 200,000 individuals in the United States. The designation also includes incentives, including financial aid for clinical testing, and seven-year marketing exclusivity in the event of regulatory approval.

An investigational antisense medicine, eplontersen, is currently being evaluated in phase III studies for treating patients with amyloid transthyretin cardiomyopathy (ATTR-CM) and hereditary transthyretin-mediated amyloid polyneuropathy (hATTR-PN). Eplontersen is being developed to treat both hereditary and non-hereditary forms of TTR amyloidosis (“ATTR”).

Shares of Ionis were up 5.1% on Monday following this announcement. The stock has declined 49.7% in the past year compared with the industry’s decrease of 31.5%. 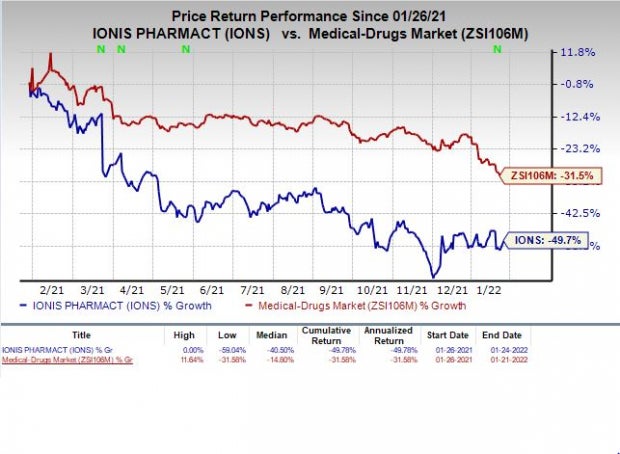 The companies will jointly share development/commercialization rights for eplontersen in the United States, while AstraZeneca will have exclusive rights to commercialize it in the rest of the world (except Latin America).

Following the deal, AstraZeneca made an upfront payment of $200 million to Ionis. In addition, Ionis will also be entitled to receive up to $485 million in development and approval milestones, and up to $2.9 billion in sales-related milestone payments, as well as royalties in the range of low double-digit to mid-twenties on net sales, upon potential approval.

Ionis has collaboration deals with leading drugmakers and big companies, including Biogen (BIIB - Free Report) and Novartis (NVS - Free Report) , for developing and marketing its medicines. The partnership deals provide Ionis with funds in the form of license fees, upfront payments and milestone payments to invest in its pipeline development.

Biogen has in-licensed Spinraza from Ionis, which is approved for treating spinal muscular atrophy ("SMA"). Biogen is responsible for commercializing the drug globally. Ionis receives royalties from Biogen on Spinraza’s sales.

Biogen has also expanded its collaboration with Ionis to identify new gene therapies for the treatment of SMA along with broad range of neurological diseases.

Ionis is developing pelacarsen in partnership with Novartis in late-stage studies for cardiovascular disease due to elevated Lp(a) levels. In 2019, Novartis in-licensed pelacarsen from Ionis.

Novartis is now responsible for conducting and funding the development of pelacarsen.