The investment blueprint lays out a two-pronged plan. It comprises the construction of a Ultium Cells battery plant in Lansing and the conversion of GM's assembly plant in Orion Township, MI, to produce the Chevrolet Silverado EV and the electric GMC Sierra, the company’s second assembly plant planned to build full-size electric pickups. Ultium Cells is a joint venture of LG Energy Solution and General Motors. Ultium batteries allow engineers to optimize battery energy storage and layout for each vehicle design.

GM will invest $4 billion in the Orion Assembly to produce Chevrolet Silverado EV and electric GMC Sierra. The main aim will be to convert the facility to produce electric trucks using the GM-developed Ultium Platform, which gives the flexibility to build vehicles for every segment. It will also generate an expected 2,350+ new jobs and retain nearly 1,000 current jobs when the plant is fully operational, besides driving capacity expansion. GM plans to fill the vacancies in the new jobs with GM transferees and new hires. Site work is scheduled to begin immediately.

Orion Assembly will be GM's third U.S. assembly plant being rebuilt to produce Ultium-powered EVs. By the end of 2025, GM is likely to have more than 1 million units of electric vehicle capacity in North America . The Ultium Cells Lansing site represents GM's third Ultium Cells battery cell manufacturing site in the United States, after two manufacturing plants being constructed in Ohio and Tennessee.

Since battery cell production forms a vital component in the EV supply chain, automakers are making a rush to carve out their own positions and have control over the cell production space.

The company is also investing an additional $510 million in two Lansing-area vehicle-assembly plants. It will make investments for the production of the next-generation Chevrolet Traverse and Buick Enclave as part of building the Lansing Delta Township Assembly. Lastly, it is investing in plant upgrades under the Lansing Grand River Assembly.

The strategic plans are being strongly supported by the Michigan Legislature, Orion Township, the City of Lansing, Delta Township as well as collaboration with the UAW and LG Energy Solution. GM sees converting 50% of its North American assembly capacity to EV production by 2030.

The investments are the most recent initiatives by GM, targeting for its niche in the EV space in North America by 2025. The investments will increase total full-size electric truck production capacity to 600,000 trucks when both Factory ZERO and Orion facilities are fully ramped. Additionally, the company is investing in its two Lansing-area vehicle assembly plants for future product enhancements. The expenditure is part of the $35 billion plan to uplift the company’s North American production capacity to build 1 million EVs by 2025.

GM is confident that the investment will bolster its manufacturing capabilities in Michigan and the United States and create a lucrative job pool.

GM, making great strides in the EV domain, looks to topple the EV king Tesla (TSLA - Free Report) to inch closer to becoming the top U.S.-based seller of EVs by the mid-decade.

Though General Motors has a lot to catch up to do in merely three years, its bold and driven initiatives make it better poised to carry the momentum ahead and emerge as one of the key EV players.

Currently, General Motors carries a Zacks Rank #2 (Buy). GM’s shares have gained 2.6% over the past year against the industry’s 8.8% decline. 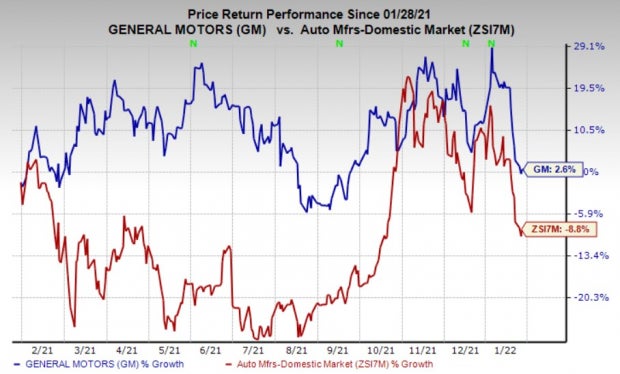 Genuine Parts’ earnings beat the Zacks Consensus Estimate in all the trailing four quarters. GPC pulled off a trailing four-quarter earnings surprise of 16%, on average. Its shares have gained 36.2% over a year.