Barring one-time items, adjusted earnings per share were $3.64 per share. The figure missed the Zacks Consensus Estimate of $4.56.

Mini Mill: The company added the segment after Jan 15, 2021 with the purchase of the remaining stake in Big River Steel. The segment recorded a profit of $366 million in the quarter. Shipments were 559,000 tons while average realized price per ton was $1,490.

The company repurchased shares worth $150 million during the fourth quarter under the $300 million stock buyback authorization announced in October 2021. Its board also authorized a new $500 million buyback program, which is expected to commence in the first quarter of 2022.

The company noted that it entered 2022 from a position of strength and remains focused on continuing its disciplined approach to creating shareholder value. It expects 2022 to be another strong year for the company. Its balance sheet has been transformed and its capital allocation priorities have enhanced direct returns to shareholders, U.S. Steel noted.

The company’s shares are down 0.8% in the past year compared with the industry’s 28.5% rise. 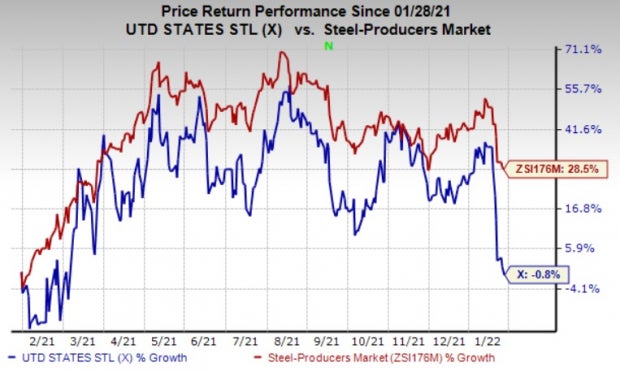 Commercial Metals, sporting a Zacks Rank #1 (Strong Buy), has a projected earnings growth rate of 62% for the current fiscal year. The Zacks Consensus Estimate for CMC's current fiscal year earnings has been revised 39.5% upward over the past 60 days. You can see the complete list of today’s Zacks #1 Rank stocks here.

Commercial Metals beat the Zacks Consensus Estimate for earnings in three of the last four quarters while missed once. It has a trailing four-quarter earnings surprise of roughly 13.1%, on average. CMC has rallied around 68% in a year.

Albemarle beat the Zacks Consensus Estimate for earnings in each of the trailing four quarters, the average being 22.1%. ALB shares have gained around 24% in a year.

AdvanSix, carrying a Zacks Rank #1, has an expected earnings growth rate of 7.4% for the current year. The Zacks Consensus Estimate for ASIX’s current-year earnings has been revised 5.3% upward in the past 60 days.

AdvanSix beat the Zacks Consensus Estimate for earnings in each of the trailing four quarters, the average being 46.9%. ASIX has rallied around 88% in a year.

5 Corporate Giants Likely to Gain From Q4 Earnings Next Week