The company also noted that it progressed well beyond the pre-pandemic level of 2019 for the sixth successive time. Management also remains on track with its Rapid Continuous Improvement (RCI) process and other cost-reduction initiatives. 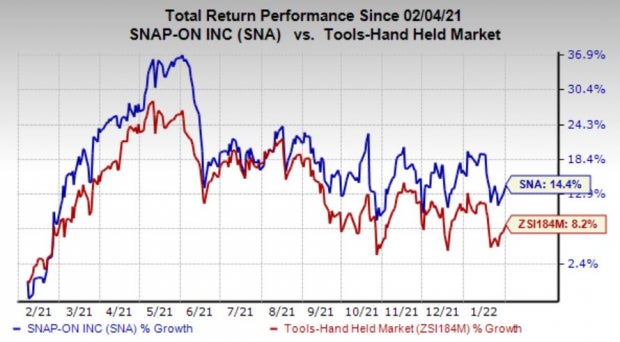 Net sales grew 3.2% to $1,108.3 million and beat the Zacks Consensus Estimate of $1,098 million. The uptick can be attributed to organic sales growth of 2.3% and $12.2 million in contributions from acquisitions, which somewhat offset the $3-million negative impact of foreign-currency translations.

The top line also advanced 16% from fourth-quarter 2019’s reported figure of $955.2 million, driven by organic sales growth of 13%, gains from acquisitions of $20.9 million and $7.1 million of positive impact from foreign currency.

The company’s adjusted operating earnings before financial services totaled $232.2 million, up 7% year over year. The metric, as a percentage of sales, expanded 80 bps to 21% in the quarter under review.

Sales in Commercial & Industrial Group decreased 1.6% from the prior-year quarter to $358.7 million, driven by an organic sales decline of 0.4% and a positive impact of $4.1 million from unfavorable foreign currency. However, the top line improved 1.6% from $352.9 million in fourth-quarter 2019 on the back of $8.7 million of contributions from acquisitions and $3.8 million of favorable foreign currency, which offset an organic sales decline of 1.9%.

The Tools Group segment’s sales rose 2% year over year to $504.8 million, driven by organic sales growth of 1.6% and a $2-million positive impact of foreign currency. Robust activity in the U.S. franchise business offset drab international operations. Sales in the segment grew 22.6% from $411.7 million in fourth-quarter 2019, owing to 21.5% organic sales growth and $3.9 million from favorable currency movement.

Sales in Repair Systems & Information Group advanced 8.7% year over year to $392.5 million. Organic sales in the segment rose 5.5% from the year-ago quarter, with $12.2 million in gains from acquisitions, which somewhat offset a $0.5-million negative impact from foreign currency. Strength in diagnostics and repair information products to independent repair shop owners and managers, and a rise in sales of under-car equipment contributed to segment growth. The top line witnessed growth of 17.2% from fourth-quarter 2019, driven by organic sales growth of 13%, a positive currency impact of $1.6 million and $12.2 million of gains from acquisitions.

The Financial Services business reported revenues of $86.9 million, down from $93.4 million in the year-ago quarter.

The Zacks Rank #4 (Sell) company continues to reel under potential threats of new COVID-19 variants and supply-chain headwinds. It remains focused on expanding the customer base, particularly in the automotive repair and critical industries. As a result, the capital expenditure for 2022 is projected to be $90-$100 million.

Oxford Industries currently sports a Zacks Rank #1 (Strong Buy). The company has a trailing four-quarter earnings surprise of 96.7%, on average. Shares of OXM have gained 23.7% in the past year. You can see the complete list of today’s Zacks #1 Rank stocks here.

Delta Apparel currently carries a Zacks Rank #2 (Buy). The company has a trailing four-quarter earnings surprise of 95.5% on average. The DLA stock has gained 40% in the past year.

Steven Madden presently carries a Zacks Rank #2. The company has a trailing four-quarter earnings surprise of 41.9%, on average. Shares of SHOO have rallied 17.9% in a year.

The Zacks Consensus Estimate for Steven Madden’s current financial-year sales and earnings suggests growth of 50.8% and 267.2% from the year-ago period’s reported numbers, respectively.