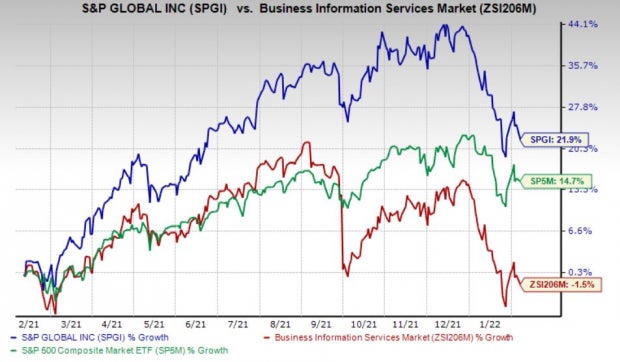 Market Intelligence revenues were up 8% year over year to $584 million, primarily driven by growth in Data Management Solutions, Credit Risk Solutions and Desktop.

S&P Global exited fourth-quarter 2021 with cash, cash equivalents and restricted cash of $6.51 billion compared with $5.91 billion at the end of the prior quarter. Long-term debt was $4.11 billion, flat sequentially.

The company generated $940 million of cash from operating activities in the reported quarter. Capital expenditures were $2 million. Free cash flow was $846 million.

S&P Global did not repurchase any share during 2021 due to the pending merger with IHS Markit.

Robert Half’s revenues of $1.77 billion surpassed the consensus mark by 4.3% and increased 36.2% year over year on a reported basis and 36% on an as-adjusted basis.

ADP’s adjusted earnings per share of $1.65 beat the Zacks Consensus Estimate by 1.2% and rose 9% year over year.

ADP’s total revenues of $4.03 billion beat the consensus mark by 1.1% and improved 9% year over year on a reported basis as well as on an organic constant-currency basis.