Quarterly revenues gained 9% on a reported basis and 13% at CER to $13 billion (£9.53 billion), beating the Zacks Consensus Estimate of $12.62 billion. The growth was driven by a rise in sales of new and specialty drugs,  and Consumer Healthcare products along with additional sales from its COVID-19 antibody drug Xevudy,

Sales in the United States were up 40%. Sales in European and International markets gained 6% and 17%, respectively, at CER.

Xevudy generated sales of £828 million ($1.12 billion) during the fourth quarter, compared with £114 million in the third quarter. Sales were majorly driven by U.S. government contracts aggregating to £586 million during the reported quarter. Xevudy sales contributed 6% to the Pharmaceuticals sales growth.

Glaxo developed Xevudy in collaboration with Vir Biotechnology (VIR - Free Report) . The monoclonal antibody treatment from Glaxo and Vir was granted emergency use authorization for patients at risk of hospitalization in the United States in May 2021. The Vir-partnered drug received conditional marketing authorization in Europe in December 2021.

Sales of Anoro Ellipta decreased 17% at CER during the fourth quarter.

HIV sales decreased 1% year over year on a reported basis. However, it was up 3% at CER. Sales growth of new HIV drugs — Juluca, Dovato, Cabenuva and Rukobia — was partially offset by weaker sales of three-drug HIV regimens — Triumeq and Tivicay. Please note that Glaxo markets Juluca in collaboration with J&J (JNJ - Free Report) .

Glaxo generates the majority of its HIV sales from its dolutegravir franchise, comprising Triumeq and Tivicay, and two-drug regimens — Dovato and J&J-partnered Juluca. The launch of the two-drug regimens has been eroding sales and market share of three-drug regimens following their launch. During the fourth quarter, Glaxo and J&J’s Juluca, and Dovato generated 34% of total HIV sales, up from 23% in the year-ago quarter. The company added a single-drug regimen — Rukobia — and the long-acting drug — Cabenuva — to its HIV franchise in 2020 and 2021, respectively.

Sales of the dolutegravir franchise were down 1% at CER in the U.S. market but up 1% in Europe. In International markets, sales were up 10% at CER.

Sales of Triumeq and Tivicay declined 15% and 10%, respectively, at CER. The combined sales of Dovato and J&J-partnered Juluca gained 47% at CER. Sales of Rukobia and Cabenuva also contributed to growth.

Sales of the immuno-inflammation segment rose 23%, mainly on the back of strong demand for Benlysta. Sales of Benlysta were up 22% in the quarter, reflecting the impact of label expansion of the drug for treating active lupus nephritis in the United States and Japan in 2020.

Oncology sales were up 18% year over year, mainly driven by Zejula. Sales of Zejula rose 24% in the quarter. Sales of the drug, Blenrep, declined 8% during the quarter. The recently-launched Jemperli added £5 million to the top line in the fourth quarter.

Sales in the Consumer Healthcare segment increased 10% at CER. Excluding sales of brands divested or under review for divestment, sales were up 10%.

Glaxo remains on track to demerge the JV with Pfizer and Shinogi from its other businesses by mid-2022. The company plans to highlight overall strategy, capabilities and operations including financial details and outlook for the Consumer Healthcare business, following the demerger on Capital Markets Day on Feb 28.

Sales of Pain relief and Oral health categories increased 11% and 4%, respectively, in the quarter. Sales of Vitamins, minerals and supplements category were up 6% in the fourth quarter. Sales of Respiratory health gained 40%. Digestive health and other category sales were up 11%.

Glaxo’s fourth-quarter vaccine sales decline of 7% at CER was due to lower revenues from the majority of its vaccines, including Shingrix.

Shingrix sales were down 4% at CER during the quarter due to the negative impact of the prioritization of the COVID-19 vaccination program amid the Omicron outbreak.

In Meningitis vaccines, Bexsero sales decreased 17% while sales of Menveo were down 42%. Sales of the influenza vaccine, Fluarix were flat. Sales of Established vaccines were down 16% year over year.

During the quarter, Glaxo recorded sales of £92 million from its pandemic adjuvant, primarily from the supply of adjuvant to Canada.

Despite fourth-quarter results beating estimates on both counts, Glaxo’s shares were down 2.1% on Feb 9, following the earnings release presumably due to decline in vaccine sales. Shares of Glaxo have gained 24.6% in the past year compared with the industry’s 16.7% increase. 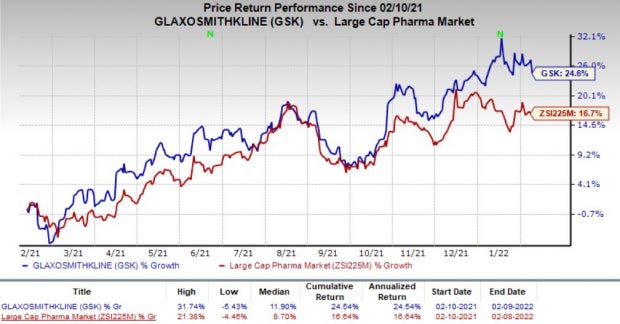 Selling, general and administration (SG&A) costs increased 2% year over year at CER to £2.9 billion. The increase in SG&A costs was led by the launch of products in the Pharmaceuticals and Vaccines segments.

Glaxo provided guidance for 2022 for the new company to be formed after the demerger of the Consumer Healthcare business. The new Glaxo will focus on the biopharma business.

The company expects sales of the new Glaxo to increase 5% to 7% in 2022. The guidance excludeds any revenues from its COVID-19 related products.

Glaxo expects sales of specialty drugs to increase by 10% at CER in 2022, while vaccine sales are expected to grow at low-teens percentage points. The sales of established drugs are estimated to decline slightly due to increased generic competition. The company expects the COVID-19 vaccine program prioritization to continue to hurt vaccine sales primarily in the first half of 2022.