Read on to know about the key takeaways from the major earnings releases of last week.

1. O’Reilly reported fourth-quarter 2021 adjusted earnings per share of $7.64, surpassing the Zacks Consensus Estimate of $6, led by growth in comparable store sales. Comps grew 14.5% year over year for the quarter, topping the Zacks Consensus Estimate of comps growth of 4.83%. The bottom line also increased from $5.40 a share recorded in the prior-year quarter. Quarterly revenues of $3,291.5 million surpassed the consensus mark of $3,066.7 million. The top line was also 16.36% higher than the prior-year figure of $2,828.8 million.

2. Group 1 reported fourth-quarter 2021 adjusted earnings per share of $9.43, beating the Zacks Consensus Estimate of $9.06. The outperformance can be attributed to higher-than-anticipated gross profit from the company’s new-vehicle retail and used-vehicle retail segments. The bottom line increased from the prior-year quarter’s $5.66 per share, marking growth of 66.6%. The automotive retailer registered net sales of $3,489.6 million, marginally beating the Zacks Consensus Estimate of $3,478.8 million. Also, the top line rose 16.7% from the year-ago quarter’s $2,990.2 million.

4. Lithia reported fourth-quarter adjusted earnings of $11.39 per share, reflecting a whopping 109% increase from the prior-year quarter’s $5.46. The figure also beat the Zacks Consensus Estimate of $9.99. Higher-than-expected revenues from new vehicle, used-vehicle (retail and wholesale), and fleet and others segments led to this outperformance. Total revenues jumped 60.1% year over year to $6,309.5 million but missed the Zacks Consensus Estimate of $6,318.4 million.

5. Harley-Davidson reported fourth-quarter 2021 adjusted earnings of 14 cents per share against the Zacks Consensus Estimate of a loss of 41 cents. Higher-than-anticipated revenues from both Motorcycles & Related Products and Financial Services segments resulted in this outperformance. The bottom line also compared favorably with the loss of 63 cents per share reported in the year-ago quarter. The company generated consolidated revenues (including motorcycle sales and financial services revenues) of $1,016 million, up 40% from the year-earlier quarter. 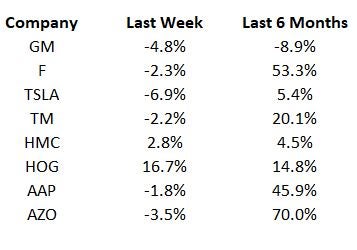 Industry watchers will track China vehicle sales data for January 2022, which is likely to be released by the China Association of Automobile Manufacturers soon. Also, stay tuned for quarterly results of a host of auto companies, including a few S&P sector components, that are slated to be reported this week.