Adjusted earnings in the reported quarter were $6.83 per share, topping the Zacks Consensus Estimate of $5.17.

The company recorded net sales of $3,988.7 million, up around 87% year over year. The top line surpassed the Zacks Consensus Estimate of $3,874.6 million. Sales were driven by higher pricing and healthy underlying demand in many of the company’s major end markets.

Demand in non-residential construction, the company’s biggest market, was impacted by typical year-end seasonality in the fourth quarter. The company expects non-residential construction activities to strengthen through 2022. Reliance Steel witnessed strength in semiconductors and an accelerated recovery in the energy (oil and natural gas) market. Demand in the heavy industry remained steady in the reported quarter.

The company also witnessed steady demand for the toll processing services that it provides to the automotive market despite the impact of global microchip shortages on production levels. Additionally, demand in commercial aerospace improved during the reported quarter on a recovery in activities.

Average prices per ton sold in the fourth quarter went up roughly 87% year over year to $3,139. Prices also rose around 10% on a sequential comparison basis.

Earnings for full-year 2021 were $21.97 per share compared with $5.66 per share a year ago. Revenues rose roughly 60% year over year to $14,093.3 million for the full year.  Sales were driven by strong demand and favorable metal pricing.

The company generated cash flow from operations of $799.4 million in 2021.

Reliance Steel repurchased around 2.1 million shares of its common stock for $323.5 million in 2021. Its board also increased its quarterly dividend by 27.3% to 87.5 cents per share.

Reliance Steel remains optimistic about the business environment in the first quarter of 2022 and sees robust underlying demand in the majority of its end markets.

Reliance Steel estimates its tons sold to be up 5-7% in the first quarter compared with the prior quarter factoring in higher seasonal shipping volumes. The volume forecast is lower than the typical first-quarter expectation as a result of weaker demand in January and early February due to sustained supply-chain and labor disruptions, the company noted.

The company anticipates its average selling price per ton sold to be down only 2-4% sequentially in the first quarter notwithstanding the significant declines in prices for carbon hot-rolled coil and sheet products. It expects adjusted earnings per share in the band of $7.05-$7.15 for the first quarter.

Reliance Steel’s shares have gained 32.3% in a year compared with the industry’s 78.7% rise. 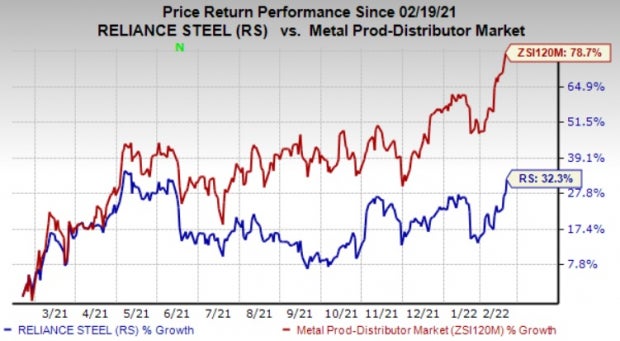 Commercial Metals, sporting a Zacks Rank #1, has a projected earnings growth rate of 62% for the current fiscal year. The Zacks Consensus Estimate for CMC's current fiscal year earnings has been revised 22.7% upward over the past 60 days. You can see the complete list of today’s Zacks #1 Rank stocks here.

Commercial Metals beat the Zacks Consensus Estimate for earnings in three of the last four quarters while missed once. It has a trailing four-quarter earnings surprise of roughly 13.1%, on average. CMC has rallied around 54% in a year.

Cabot beat the Zacks Consensus Estimate for earnings in each of the trailing four quarters, the average being 21.6%. CBT shares have gained around 48% in a year.

AdvanSix, carrying a Zacks Rank #2, has an expected earnings growth rate of 7.4% for the current year. The Zacks Consensus Estimate for ASIX’s current-year earnings has been revised 3.2% upward in the past 60 days.

AdvanSix beat the Zacks Consensus Estimate for earnings in each of the trailing four quarters, the average being 46.9%. ASIX has rallied around 44% in a year.