Excluding stock-based compensation expense, earning per share came in at 35 cents, up from 14 cents in the year-ago quarter.

Net revenues came in at $451.1 million, which increased from $270 million reported in the year-ago quarter and surpassed the Zacks Consensus Estimate of $358 million.

Exelixis’ shares have lost 17.4% in the past year compared with the industry’s decline of 38.8%. 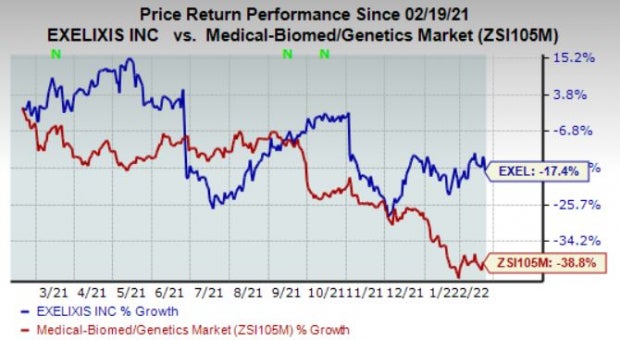 Net product revenues came in at $302.7 million, up from $200.3 million reported in the year-ago quarter. The upside was primarily led by an increase in sales volume that was primarily driven by the strong uptake for the combination therapy of Cabometyx (cabozantinib tablets) and Bristol-Myers’ (BMY - Free Report) Opdivo (nivolumab) following FDA approval in January.

Bristol-Myers’ Opdivo is one of the leading revenue generators of the company and is approved for various oncology indications.

In the fourth quarter, Exelixis recorded in license revenues a $100.0 million milestone from Ipsen in connection with the achievement of $400.0 million in net sales in its related license territory over four consecutive quarters. Exelixis expects to receive this payment in the first quarter of 2022.

Enrollment was completed for CONTACT-01, the phase III study evaluating cabozantinib in combination with Tecentriq versus docetaxel in patients with metastatic non-small cell lung cancer (NSCLC). Interim data from the study are anticipated in the second half of 2022.

In December 2021, Exelixis announced the initiation of the dose-escalation stage of STELLAR-002, a phase Ib study evaluating XL092 in combination with immuno-Oncology (IO) therapies in advanced solid tumors.

Exelixis’ fourth-quarter results were encouraging, with a beat on both counts.  The approval of Cabometyx in combination with immuno-oncology drug, Opdivo, for advanced RCC has boosted sales. However, competition is stiff in this space and capturing additional market share might become tough.

Merck’s Keytruda, an anti-PD-1 therapy, is approved for the adjuvant treatment of patients with RCC at intermediate-high or high risk of recurrence, following nephrectomy or nephrectomy and resection of metastatic lesions.

What's in the Offing for Magnite (MGNI) This Earnings Season?