Fortive Corporation’s (FTV - Free Report) board recently approved a share repurchase program under which the company may purchase up to 20 million shares of its common stock. The move underscores FTV’s sound financial position and its commitment to reward its shareholders.

Details of the Program

Fortive can buy back its common stock on a voluntary basis from time to time on the open market or in privately negotiated transactions under the new repurchase program. This includes the use of trading plans that meet the prerequisites of Rule 10b5-1 under the Securities Exchange Act of 1934.

Fortive’s management will determine the timing and amount of common stock repurchased made under the program based on its assessment of market conditions and other relevant factors. The program does not have an expiration date. Also, Fortive is not liable to buy back any particular amount of shares and may suspend or cancel the repurchase program at any time.

Washington-based Fortive’s new repurchase program is backed by a disciplined and balanced capital allocation strategy. It is also reflective of the company’s confidence in the strength of its cash flow generation.

This testing equipment company has rewarded shareholders with regular dividends and has an impressive dividend payment history. Evidently, in January 2022, Fortive declared a regular quarterly cash dividend of 7 cents per share payable on Mar 25, 2022, to shareholders as of Feb 25. Fortive’s dividend yield currently stands at 0.44%. This yield is attractive for investors as it represents a steady income stream. The company will be able to further enhance total shareholder returns with the help of the new repurchase program set up.

Such a solid distribution strategy is backed by the company’s ability to generate strong revenues and free cash flow. Markedly, Fortive witnessed a 3.8% year-over-year improvement in fourth-quarter 2021 sales.

Shares of FTV have declined 5% in the past year compared with the industry’s fall of 4.8%. 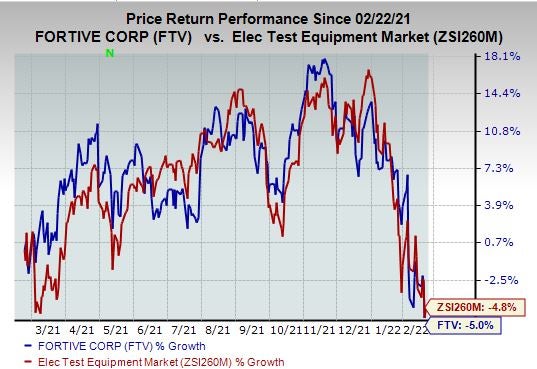 Rewarding shareholders with share buybacks is one way to highlight the company's financial strength. In this context, other companies in the tech sector that have deployed their capital in share repurchasing activity are:

In January 2022, SAP SE (SAP - Free Report) floated a new up to €1-billion share repurchase authorization, which it will utilize to fund awards under the “Move SAP” share-based compensation scheme, going ahead.

SAP reported fourth-quarter 2021 non-IFRS earnings of $2.13 per share, surpassing the consensus mark of $1.88. In the past year, SAP stock has declined 8%.

Ciena reported fourth-quarter fiscal 2021 adjusted net income of $132.7 million or 85 cents per share compared with $94.5 million or 60 cents per share in the year-ago quarter. The bottom line missed the Zacks Consensus Estimate by a penny. Shares of CIEN have returned 26.1% in the past year.

AspenTechnology (AZPN - Free Report) repurchased approximately 439,000 shares of its common stock for $65 million in the second quarter of fiscal 2022 and 1.1 million shares for $150 million in the fiscal first quarter. The company had paused share buybacks to maintain near-term liquidity and financial flexibility amid the COVID-19 crisis and resumed share buybacks in the fourth quarter of fiscal 2021. It is expecting to repurchase shares worth $300 million under its new repurchase plan in fiscal 2022.

Aspen Technology reported second-quarter fiscal 2022 non-GAAP earnings of $1.20 per share, lagging the Zacks Consensus Estimate by 16.1%. Shares of AZPN have lost 6.7% in the past year.