Shares of Radius Health, Inc. were up 17.77% following its better-than-expected fourth-quarter results.

The company incurred a loss of 33 cents per share in the fourth quarter, narrower than the Zacks Consensus Estimate of a loss of 35 cents and the year-ago quarter’s loss of 46 cents.

The company reported revenues of $65.1 million, which beat the Zacks Consensus Estimate of $63 and jumped from $62.7 million in the year-ago quarter. Revenues came in from the sales of the lead drug, Tymlos (abaloparatide-SC) injection, which is approved for the treatment of postmenopausal women with osteoporosis at high risk of fracture.

Shares of the company have lost 57.2% in the past year compared with the industry’s decline of 31.2%. 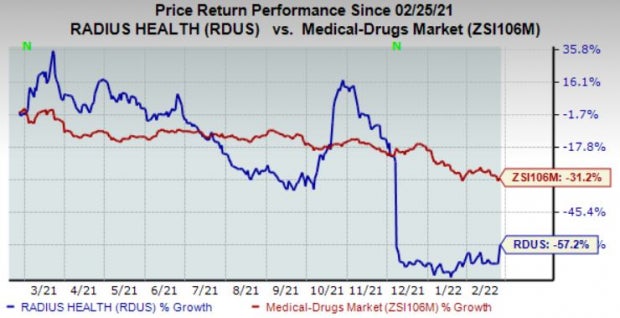 Tymlos revenues in the quarter came in $65 million, up from $60 million in the year-ago quarter.

Research & development expenses in the reported quarter were $41.5 million, up from $36.4 million, due to an increase in abaloparatide-TD program costs.

Selling, general and administrative expenses were $30 million, down 16%.

Radius Health is evaluating Tymlos for additional indications. In October 2021, the company announced positive top-line results from its phase III ATOM study of Tymlos for the treatment of osteoporosis in men. ATOM study met the primary endpoint of change in lumbar spine bone mineral density at 12 months. The study also met secondary endpoints relating to bone mineral density changes in the lumbar spine at six months as well as at the hip and femoral neck at 12 months. The company plans to submit a supplemental new drug application (sNDA) in the first quarter of 2022.

It is also developing an abaloparatide transdermal system (“abaloparatide-TD”) for potential use in the treatment of postmenopausal women with osteoporosis. However, abaloparatide-TD did not demonstrate non-inferiority to Tymlos in the phase III wearABLe study.

Radius and its partner Menarini Group announced that EMERALD, a pivotal study evaluating elacestrant in breast cancer, was positive for monotherapy versus the standard of care for patients with ER+/HER2- advanced or metastatic breast cancer (mBC), including those with the Estrogen Receptor Mutation (ESR1). The study met both primary endpoints for the overall population and the ESR1 mutation subgroup. Both the companies are working toward regulatory submission in the United States and Europe in the second quarter of 2022.

Tymlos revenues are expected to be $232 million, below the Zacks Consensus Estimate of $271.2 million.

Radius reported a narrower loss in the fourth quarter and sales beat estimates. However, the guidance for 2022 was disappointing as well.

A better-ranked stock in the healthcare sector is Vertex Pharmaceuticals (VRTX - Free Report) , which at present carries a Zacks Rank #2 (Buy). You can see the complete list of today’s Zacks #1 Rank (Strong Buy) stocks here.