Fomento Economico Mexicano S.A.B. de C.V’s (FMX - Free Report) , alias FEMSA, reported net majority earnings per ADS of 92 cents (Ps. 1.88 per FEMSA unit) in fourth-quarter 2021, missing the Zacks Consensus Estimate of $1.13. The company noted that trends across its business units and markets have been improving as the health situation continues to recover.

Net consolidated income for the largest franchise bottler for The Coca-Cola Company (KO - Free Report) was Ps. 10,100 million (US$486.7 million), reflecting a significant improvement from Ps. 730 million (US$35.4 million) reported in the year-ago quarter. The improvement can primarily be attributed to robust income from operations, reduced interest expenses and increased participation in associates’ results, mainly Heineken’s.

Total revenues were $7,307 million (Ps. 151,542 million), which improved 16.3% year over year and 14.6% from fourth-quarter 2019 in the local currency. Revenues, in U.S. dollar, beat the Zacks Consensus Estimate of $7,032 million. Revenue growth was driven by gains across all business units, along with a favorable comparison with the year-ago quarter. On an organic basis, total revenues rose 12.9%.

Shares of the Zacks Rank #1 (Strong Buy) company have gained 14.3% in the past year compared with the industry’s growth of 21.2%. You can see the complete list of today’s Zacks #1 Rank stocks here. 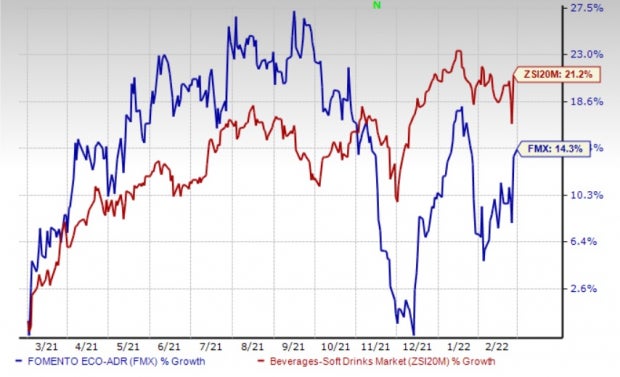 FEMSA’s operating income (income from operations) was up 18% to Ps. 15,509 million (US$747.4 million). On an organic basis, operating income improved 17%. Consolidated operating margin expanded 10 bps to 10.2%, driven by margin expansion at FEMSA Comercio’s Proximity and Health Divisions, partly negated by a decline at Coca-Cola FEMSA.

FEMSA Comercio — Health Division: The segment reported total revenues of Ps. 18,581 million (US$895.5 million), up 7.3% year over year. Revenues benefited from favorable trends in Mexico and Colombia operations as well as higher consumption in Chile. This was partly offset by negative currency translations. Same-store sales for drugstores increased 5.7%.
On a currency-neutral basis, total revenues increased 14.3%, while same-store sales increased 10.3%. The segment had 3,652 points of sales across all regions as of Dec 31, 2021. The operating income improved 10.1% year over year, while the operating margin rose 10 bps to 5%. The decline can be attributed to tight expense control and efficiency gains across its operations.

FEMSA Comercio — Fuel Division: Total revenues rose 30.2% to Ps. 11,065 million (US$533.3 million). Same-station sales improved 23.3%, driven by an 8.3% increase in the average volume and 13.8% growth in the average price per liter. The company had 567 OXXO GAS service stations as of Dec 31, reflecting the addition of one station in the reported quarter. Operating income advanced 31.4% and the operating margin was flat at 3.9%.

Logistics and Distribution: Total revenues for the segment were Ps. 14,603 million (US$703.8 million). Revenues reflected positive demand trends across Latin America as well as recovery in some end-user segments in the United States. The segment’s operating income was Ps. 578 million (US$27.9 million), with 4% of operating margin.

Coca-Cola FEMSA: Total revenues for the segment advanced 8.5% year over year to Ps. 53,273 million (US$2,567.4 million). Revenues were mainly aided by improved volume, pricing initiatives and favorable price-mix effects. On a comparable basis, revenues improved 10.5%. Coca-Cola FEMSA’s operating income increased 7.6% and comparable operating income rose 8%. Operating income growth resulted from favorable revenues, partly offset by the normalization of some operating expenses like marketing, labor and maintenance due to the reopening of operations and increased mobility in most markets. The segment’s operating margin contracted 10 bps to 14.6%.

Concurrently, the company completed the acquisition of the previously announced OK Market. The small-format proximity store chain in Chile will add 134 locations to FEMSA’s proximity business. This will enhance FEMSA’s existing presence in this important market, reaching a total of 258 locations.

Coca-Cola, which is a global beverage giant, currently has a Zacks Rank #2 (Buy). The company has an expected EPS growth rate of 8% for three-five years. Shares of KO have improved 24.2% in the past year.

The Zacks Consensus Estimate for Coca-Cola's current financial-year sales and earnings per share suggests growth of 8.8% and 6%, respectively, from the year-ago period. KO has a trailing four-quarter earnings surprise of 13.5%, on average.

Diageo, involved in producing, distilling, brewing, bottling, packaging and distributing spirits, wine and beer, currently has a Zacks Rank #2. Shares of DEO have rallied 24.2% in the past year.

The Zacks Consensus Estimate for Diageo’s current financial-year sales and earnings per share suggests growth of 32.1% and 15.9%, respectively, from the year-ago period’s reported figures. DEO has an expected EPS growth rate of 9.2% for three-five years.