Revenues, primarily from its cardiovascular drug, Vascepa, were down almost 13.6% year over year to approximately $144.5 million in the quarter but beat the Zacks Consensus Estimate of $141.5 million. Sales were hurt due to rising generic competition in the United States.

The company stated that it is unable to provide revenue guidance for 2022 due to the uncertainty related to the COVID-19 pandemic and generic competition for its sole marketed drug, Vascepa, in the United States.

Despite better-than-expected fourth-quarter results, shares of Amarin were down 3.6% on Mar 1, presumably due to seemingly rising generic competition for Vascepa. The stock has declined 45.3% in the past year compared with the industry’s 34.3% decrease. 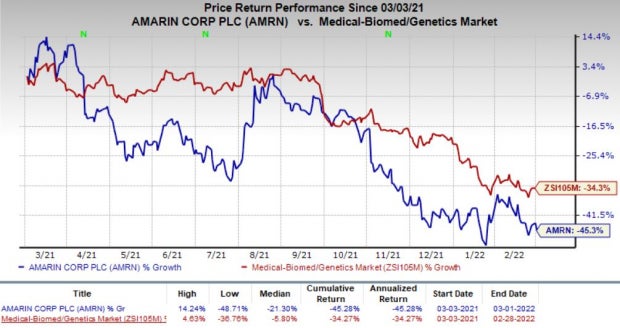 Product revenues, entirely from Vascepa, were $143.7 million, down 13.4% year over year due to lower volumes in the United States due to generic competition for its reduction of triglyceride levels indication.

On its earnings call, Amarin stated that currently there are three commercialized generic versions of Vascepa’s reduction of triglyceride levels indication in the United States. The availability of these generic versions hurt Vascepa U.S. sales during the fourth quarter along with COVID-19 related disruptions.

Amarin reported total revenues of $583.2 million in 2021, down 5% year over year. The company reported earnings of 2 cents per ADS for the full year against a loss of 5 cents per ADS in the year-ago period.

Amarin launched Vazkepa (U.S. tradename Vascepa) in Germany in September last year. The company has already submitted market access and reimbursement dossiers in 10 other European countries and is progressing with the launch plan in these countries. It expects to launch Vazkepa in six European countries  in 2022.

Apart from Europe, Amarin is also focusing on expanding in other international countries. The company’s partners are expected to file regulatory filings, which may be followed by potential approval and launch in up to six countries in the Asia-Pacific markets in 2022. The company’s partner is expected to get decisions related to the potential approval for Vascepa in Mainland China and Hong Kongin the second half of 2022.

The company has already received regulatory approval for Vascepa in several Middle Eastern countries through its partners. It is actively pursuing the launch of the drug in these countries in 2022.

Celularity delivered a negative earnings surprise of 237.93%, on average, in the last four quarters.

Gamida delivered a negative earnings surprise of 22.6%, on average, in the last four quarters.

Assertio’s earnings per share estimates have moved north from 20 cents to 35 cents for 2022 in the past 60 days. ASRT has risen 9.7% so far this year.

Assertio delivered an earnings surprise of 33.33%, on average, in the last four quarters.