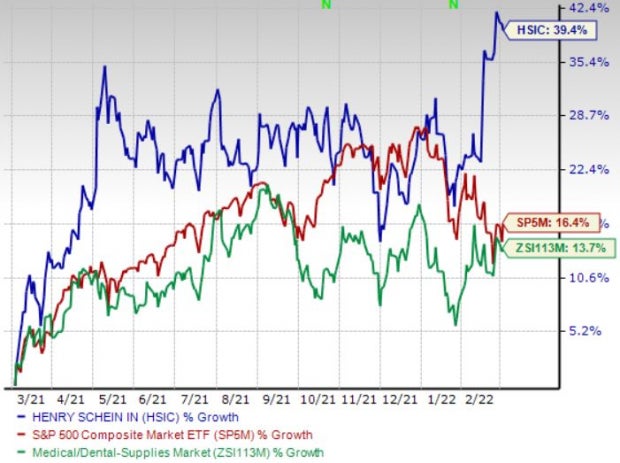 Henry Schein is witnessing an upward trend in its stock price, prompted by favorable trends in its dental business. A robust fourth-quarter 2021 performance, along with the company’s potential in Henry Schein One, is expected to contribute further. However, the impact of group purchasing organizations (GPOs) and tough competition are worrying.

During the fourth quarter of 2021, Henry Schein’s global dental sales recorded year-over-year uptick. The company noted that growth was strong in each of the dental specialty categories, including implants, oral surgery, endodontics and orthodontics, in the reported quarter. The company’s North American dental internal sales growth in local currencies was driven by solid growth, both in consumable merchandise as well as equipment product categories.

Henry Schein One Holds Potential: Henry Schein seems to be upbeat about its dental technology joint venture, Henry Schein One. Henry Schein One’s dental software business has been progressing well despite a challenging business environment. The company, this month, announced that a new version of its market-leading dental analytics platform for dental service organizations, Jarvis Analytics, is now available for private practices.

Internationally, technology and value-added services internal sales in local currencies increased compared with the prior year, driven primarily by Henry Schein One, with particular strength in the software excellence business. The company has also seen solid growth in the business with Dentrix Enterprise, Dentrix Ascend, Demandforce and DentalPlans.com solutions.

Impact of GPOs: The healthcare industry has been facing numerous headwinds, such as measures to curb capital expenditure, volume headwind, pricing pressure and procedure deferrals, among others. In light of these facts, some large integrated healthcare providers and GPOs have gained considerable purchasing power. The GPOs act as agents that negotiate vendor contracts on behalf of their members. The GPOs have also increased pricing pressure in the industry. This might be a drag on Henry Schein’s business in the future.

AMN Healthcare has an estimated long-term growth rate of 16.2%. AMN’s earnings surpassed estimates in the trailing four quarters, the average surprise being 20%. It currently flaunts a Zacks Rank #1 (Strong Buy). You can see the complete list of today’s Zacks #1 Rank stocks here.

AMN Healthcare has gained 55.7% against the industry’s 53.5% fall over the past year.

Allscripts, sporting a Zacks Rank #1, has an estimated long-term growth rate of 16.3%. MDRX’s earnings surpassed estimates in the trailing four quarters, the average surprise being 64.8%.

Allscripts has gained 34.3% against the industry’s 46.4% fall over the past year.

Change Healthcare has an estimated long-term growth rate of 8%. CHNG’s earnings surpassed estimates in two of the trailing four quarters, the average surprise being 1.4%. It currently carries a Zacks Rank #2.

Change Healthcare has lost 3.9% compared with the industry’s 46.4% fall over the past year.