General Motors Co. (GM - Free Report) and POSCO Chemical have recently announced that they are working in unison with the governments of Canada and Quebec to build a new facility in Bécancour, Quebec. The site, with an estimated value of $400 million (C$500 million), will produce cathode active material (“CAM”) for GM’s Ultium batteries, which will power electric vehicles (“EV”) such as the Chevrolet Silverado EV, GMC HUMMER EV and Cadillac LYRIQ.

Plans to form a CAM-processing joint venture, to be majorly owned by POSCO, were made public in December 2021. Construction of the new facility, to be operated by the joint venture, will commence immediately and generate nearly 200 jobs.

The facility will empower GM to mark its spot in the EV supply chain as it is also set to launch Canada’s first full EV manufacturing plant in Ingersoll, Ontario, later this year.

POSCO Chemical is also enthusiastic about expanding its battery material supplying capability across North America by setting up a cathode material plant in Canada.

Per plans, the Quebec site will process CAM, a crucial battery material consisting of components like processed nickel, lithium and other materials, representing about 40% of the cost of a battery cell.

The investment blueprint lays out a two-pronged plan. It comprises the construction of an Ultium Cells battery plant in Lansing, MI and the conversion of GM's assembly plant in Orion Township, MI, to produce the Chevrolet Silverado EV and the electric GMC Sierra, the company’s second assembly plant planned to build full-size electric pickups.

Notably, by the end of 2025, GM looks to manufacture one million electric vehicles in North America and to sustainably procure, process or manufacture majority of the components in North America itself. GM has a series of upcoming collaborative actions planned to create a more secure EV supply chain, including projects targeting key EV materials and components.

To secure lithium, it will work with Controlled Thermal Resources. For rare earth materials, together with GE, it will develop a rare earth value chain. GM is set to join forces with MP Materials to establish the first North American processing site for alloy flakes. Its collaboration with VAC, the largest producer of permanent magnets, will support GM’s magnet requirements in North America, starting in 2024, which will include locally sourced raw materials and finished magnet production. 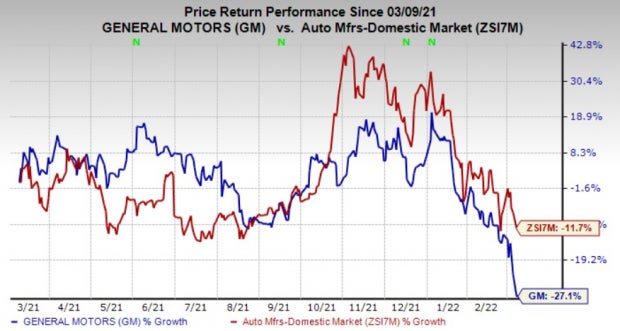 Harley-Davidson has an expected earnings growth rate of 1.9% for the current year. The Zacks Consensus Estimate for current-year earnings has been revised around 21.7% upward in the past 60 days.

Harley-Davison’s earnings beat the Zacks Consensus Estimate in all the trailing four quarters. HOG pulled off a trailing four-quarter earnings surprise of 77.59%, on average. The stock has rallied 1.3% over the past year .

LCI Industries has an expected earnings growth rate of 27.8% for the current year. The Zacks Consensus Estimate for current-year earnings has been revised around 16% upward in the past 60 days.

LCI Industries’ earnings beat the Zacks Consensus Estimate in three of the trailing four quarters and missed in one. LCII pulled off a trailing four-quarter earnings surprise of 12.86%, on average. The stock has declined 19.5% over the past year.

Tesla has an expected earnings growth rate of 40.7% for the current year. The Zacks Consensus Estimate for current-year earnings has been revised around 17% upward in the past 60 days.

Tesla’s earnings beat the Zacks Consensus Estimate in all of the trailing four quarters. TSLA pulled off a trailing four-quarter earnings surprise of 33.26%, on average. The stock has also rallied 19.5% over the past year.