Reasons to Retain Catalent (CTLT) Stock in Your Portfolio

Catalent, Inc. (CTLT - Free Report) is well poised for growth in the coming quarters, backed by its robust facility expansion activities over the past few months. A robust second-quarter fiscal 2022 performance, along with a slew of strategic deals over the past few months, is expected to contribute further. Catalent’s operation in a competitive landscape and regulatory requirements pose a threat.

The renowned global provider of advanced delivery technologies has a market capitalization of $16.87 billion. Catalent projects 16.9% growth for the next five years and expects to maintain its strong performance. It has delivered an earnings surprise of 8.5% for the past four quarters, on average. 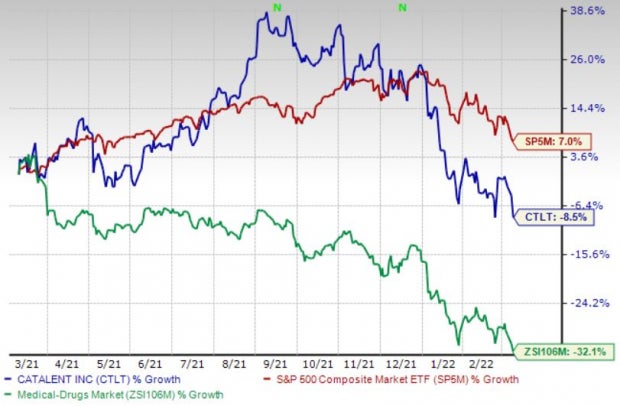 Expansionary Activities: We are upbeat about Catalent’s robust expansionary activities, like the opening of a slew of facilities over the past few months. The company, in February, announced its plans to expand its Waigaoqiao Free Trade Zone facility in Shanghai, China, to increase capacity for temperature-controlled storage and distribution of clinical supplies, as well as additional secondary packaging capabilities.

Catalent, in January, completed a $10-million expansion in large-scale isolator units at its Malvern, PA and Dartford, U.K. facilities to provide advanced containment capabilities for the micronization of highly potent drug compounds.

Strategic Deals: We are optimistic about Catalent’s robust growth opportunities via its recent tie-ups and buyouts. The company, along with BrainStorm Cell Therapeutics Inc., announced in December 2021 that the technology transfer for the latter’s NurOwn manufacturing at Catalent’s facility had been finalized.

Strong Q2 Results: Catalent’s solid second-quarter fiscal 2022 results, along with year-over-year uptick in both the top and the bottom lines, buoy optimism. Continued strength in its Biologics arm in the quarter under review looks encouraging. Robust performances by the Clinical Supply Services, and the Softgel and Oral Technologies segments also raise optimism. Expansion of the gross margin bodes well. A raised financial outlook for the year also heightens our positivity regarding the stock.

Regulatory Requirements: The healthcare industry is highly regulated, wherein Catalent and its customers are subject to various local, state, federal, national and transnational laws and regulations, including the operating, quality, and security standards of the FDA and the DEA, among others. Any future change to such laws and regulations could adversely affect the company. Failure by Catalent or its customers to comply with the requirements of these regulatory authorities could result in warning letters, among others.

Catalent is witnessing a positive estimate revision trend for 2022. In the past 90 days, the Zacks Consensus Estimate for its earnings has moved 2.7% north to $3.76.

The Zacks Consensus Estimate for the company’s third-quarter fiscal 2022 revenues is pegged at $1.23 billion, suggesting a 16.6% improvement from the year-ago quarter’s reported number.

Henry Schein, flaunting a Zacks Rank #1 (Strong Buy) at present, has an estimated long-term growth rate of 11.8%. HSIC’s earnings surpassed estimates in the trailing four quarters, the average beat being 25.5%. You can see the complete list of today’s Zacks #1 Rank stocks here.

Henry Schein has gained 27.8% compared with the industry’s 5.8% growth over the past year.

Allscripts has an estimated long-term growth rate of 16.3%. MDRX’s earnings surpassed estimates in the trailing four quarters, the average beat being 64.8%. It currently carries a Zacks Rank #2 (Buy).

Allscripts has gained 36.9% against the industry’s 50.8% fall over the past year.

AMN Healthcare has gained 33.1% against the industry’s 57.6% fall over the past year.