Kronos Worldwide, Inc. (KRO - Free Report) recorded profits of $31.6 million or 28 cents per share in fourth-quarter 2021, up from $10.2 million or 9 cents in the year-ago quarter. The figure beat the Zacks Consensus Estimate of 27 cents per share.

The bottom line in the reported quarter was driven by higher income from operations resulting from increased average titanium dioxide (TiO2) selling prices.

TiO2 production volumes were up 8% in the fourth quarter.

TiO2 segment profit increased around 137.6% to $55.6 million year over year in the reported quarter compared with $23.4 million in the year-ago quarter. This upside was driven by a rise in average TiO2 selling prices, which were partly offset by increased production costs, including higher costs for raw materials and energy.

Earnings (as reported) for full-year 2021 were 98 cents per share compared with earnings of 55 cents per share a year ago. Net sales increased 18% year over year to around $1.9 billion.

Net cash provided by operating activities was $206.5 million for full-year 2021.

Kronos expects global demand for consumer products to remain strong throughout 2022. It is seeing certain disruptions in global supply chains, including raw materials constraints as well as delays in transportation and logistics. It also expects feedstock as well as production costs, including raw material and related shipping costs to rise in 2022. As a result of these higher costs and strong demand, TiO2 selling prices are projected to increase in 2022.

The company expects its sales and income from operations for 2022 to be higher on a year-over-year basis. However, its margins are expected to be affected by cost increases.

Shares of Kronos have declined 4.9% in the past year compared with a 9.1% fall of the industry. 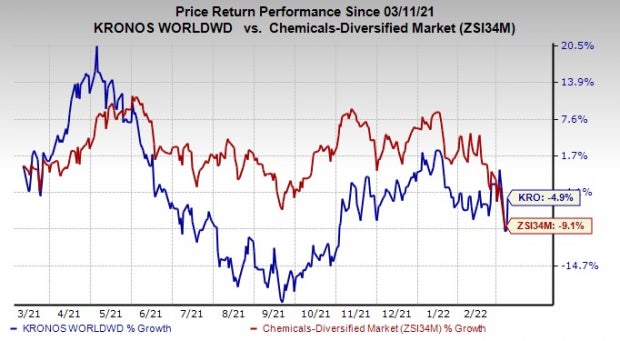 Allegheny, currently sporting a Zacks Rank #1 (Strong Buy), has an expected earnings growth rate of 661.5% for the current year. The Zacks Consensus Estimate for ATI's earnings for the current year has been revised 45.6% upward in the past 60 days. You can see the complete list of today’s Zacks #1 Rank stocks here.

Allegheny beat the Zacks Consensus Estimate for earnings in each of the trailing four quarters, the average being 127.2%. ATI has rallied around 17% over a year.

Mosaic, sporting a Zacks Rank #1, has a projected earnings growth rate of 106.4% for the current year. The Zacks Consensus Estimate for MOS's current-year earnings has been revised 22.2% upward in the past 60 days.

Mosaic beat the Zacks Consensus Estimate for earnings in three of the last four quarters, while missing once. It has a trailing four-quarter earnings surprise of roughly 3.7%, on average. MOS has rallied around 72.6% in a year.

AdvanSix has a projected earnings growth rate of 20.8% for the current year. The Zacks Consensus Estimate for ASIX’s current-year earnings has been revised 15.7% upward in the past 60 days.

AdvanSix beat the Zacks Consensus Estimate for earnings in three of the trailing four quarters, the average being 23.6%. ASIX has surged 50.7% in a year. The company sports a Zacks Rank #1.