On the news front,U.S. auto giant General Motors (GM - Free Report) collaborated with POSCO Chemical with plans to establish a new plant in Quebec to produce battery material for electric cars. Then there were earnings releases from recreational vehicle maker Thor Industries (THO - Free Report) and electric vehicle upstart Rivian Automotive (RIVN - Free Report) . While Thor delivered a comprehensive beat, Rivian incurred a wider-than-expected quarterly loss. Meanwhile, Group 1 Automotive (GPI - Free Report) is set to add $435 million in annualized revenues with the acquisition of a Toyota dealership in Austin. Oshkosh Corporation (OSK - Free Report) also made it to the top stories as its subsidiary acquired Cartseeker to enhance tech capabilities.

General Motors and POSCO announced that they are working with the governments of Canada and Quebec to build a new facility in Bécancour. The site, with an estimated value of $400 million (C$500 million), will produce cathode active material (“CAM”) for GM’s Ultium batteries, which will power its EV models including Chevrolet Silverado EV, GMC HUMMER EV and Cadillac LYRIQ.

Per plans, the Quebec site will process CAM, a crucial battery material consisting of components like processed nickel, lithium and other materials, representing about 40% of the cost of a battery cell. The facility will empower GM to mark its spot in the EV supply chain as it is also set to launch Canada’s first full EV manufacturing plant in Ingersoll, Ontario, later this year. POSCO is also enthusiastic about expanding its battery material supplying capability across North America by setting up a cathode material plant in Canada.

Thor posted adjusted earnings of $4.79 per share for second-quarter fiscal 2022, which beat the Zacks Consensus Estimate of $3.40. This outperformance can be attributed to higher-than-anticipated revenues across North American Towable and Motorized RVs segments. The bottom line jumped 101.3% from the year-ago profit of $2.38 per share. THO registered revenues of $3,875 million for the quarter under review, topping the Zacks Consensus Estimate of $3,553 million. The top line also recorded a 42.1% year-over-year increase.

Rivian incurred a net adjusted loss of $2.43 a share in the fourth quarter of 2021, wider than the Zacks Consensus Estimate of $1.58. Total revenues came in at $54 million, beating the consensus mark of $50 million. The company delivered 909 vehicles in the quarter. RIVN generated a negative gross profit of $383 million during the quarter under review. Operating expenses summed $2,071 million, flaring up from $353 million incurred in the comparable year-ago period.

Rivian ended 2021 with $18.4 billion in cash, cash equivalents, and restricted cash. Capex for the fourth quarter totaled $455 million. Given higher year-over-year net cash used in operating activities and massive capital spending, Rivian witnessed a negative free cash flow of $1,541 million in the fourth quarter of 2021, deteriorating from negative 574 million during the corresponding period of 2020. RIVN aims to deliver 25,000 vehicles this year.

Group 1 announced the acquisition of Charles Maund Toyota dealership in Austin, TX. The buyout will strengthen Group 1’s existing portfolio of 13 franchises in the fast-growing Central Texas market area, consisting of Austin and San Antonio. The strength of the Austin market, combined with that of Toyota’s, promises a lucrative growth pool for Group 1. The dealership promises to generate $435 million in annual revenues and represents the 16th Toyota store in GPI’s U.S. portfolio.

In a separate news, Group 1 expanded its $2 billion five-year revolving credit facility with 21 financial institutions to $2.4 billion, thereby solidifying Group 1’s financials and liquidity. The credit facility is scheduled to expire in March 2027. The facility will offer $1.6 billion for inventory floorplan financing and $349 million for working capital, acquisitions, and general corporate purposes, which can be extended to a maximum of $500 million.

Oshkosh’s subsidiary, McNeilus Truck and Manufacturing, Inc., has acquired the CartSeeker curbside automation product from Eagle Vision Systems, Inc. and Waterloo Controls, Inc. McNeilus, intending to design and develop technology and heavy-duty truck advancements that will change the face of the waste disposal industry, has set out to invest in refuse collection vehicle automation technologies that complement its vision.

CartSeeker is a patented AI-based technology that identifies and locates curbside waste carts and automates the operation of the truck’s robotic lift arm without the use of a joystick. This technology was first featured on the McNeilus Zero Radius Side Loader at Waste Expo in Las Vegas in June 2021. The technology will enable Oshkosh’s arm to provide high-performance solutions that rely on operational simplicity. 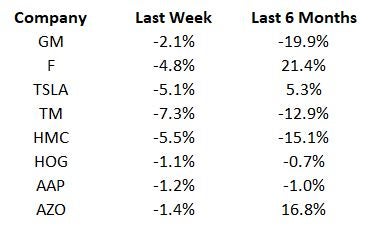 Industry watchers will keep a tab on February passenger vehicle registrations to be released by the European Automobile Manufacturers Association this week. Also, stay tuned for usual news releases from the auto industry.

Here's Why it is Appropriate to Own Diageo (DEO) Stock Now