Rio Tinto plc (RIO - Free Report) has made a non-binding proposal to the Turquoise Hill board to acquire approximately 49% of the issued and outstanding shares of Turquoise Hill. Rio Tinto currently holds a 51% stake in Turquoise Hill. If this deal comes to fruition, Rio Tinto will end up holding a 66% interest in Oyu Tolgoi — one of the largest known copper and gold deposits in the world.

Following the comprehensive agreement reached between Rio Tinto, Turquoise Hill and the government of Mongolia in January this year, underground operations are now underway at the Oyu Tolgoi project. The agreement unlocks the most valuable part of the mine, with the first sustainable production expected in the first half of 2023. Once the underground project completes, Oyu Tolgoi will be one of the biggest copper mines in the world. Production in its early years is estimated at around 500,000 tons.

This poises the company to capitalize on the growing demand for copper. The long-term outlook for copper is positive as copper demand is expected to grow, driven by electric vehicles and renewable energy and infrastructure investments. Yet, future supply growth remains challenging, given the declining ore grades and the lack of major discoveries.

Rio Tinto and other miners like BHP Group (BHP - Free Report) and Vale S.A (VALE - Free Report) are now focusing on increasing their exposure to future-facing commodities such as copper and nickel, which are the key components for the green energy transition.

Copper prices have recently gained supply disruption and low global stockpiles. Meanwhile, the world's biggest producer, Chile, recorded its lowest January output since 2011. The country’s output was down 15% from December 2021 and 7.5% from January 2021.

In the past year, shares of Rio Tinto have fallen 8.6% compared with the industry’s growth of 5.2%. 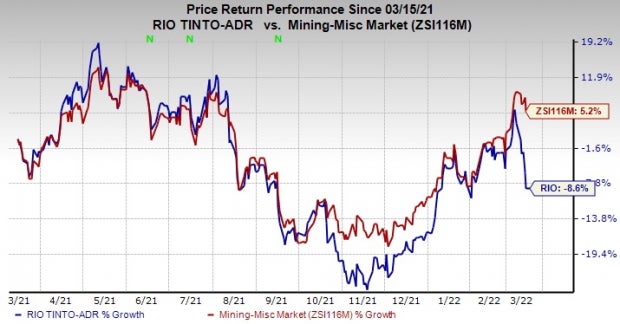 Another top-ranked stock in the basic materials space is Teck Resources (TECK - Free Report) , carrying a Zacks Rank #2 at present.

Teck Resources has a projected earnings growth rate of 26.1% for the current year. The Zacks Consensus Estimate for TECK's current-year earnings has been revised upward by 33% in the past 60 days.

Teck Resources beat the Zacks Consensus Estimate for earnings in three of the trailing four quarters and missed once, the average surprise being 13%. TECK’s shares have surged around 95% in a year.

Here's Why Carter's (CRI) is Marching Ahead of Its Industry