The company’s share price inched up 0.2% yesterday to eventually close the trading session at $92.45.

Per the contract, the company’s electrical VSDS will be used for an airplane motor compressor test bench at Safran’s new aerodynamics test center BeCOVER, which is under the development stage in Liege, Belgium. It’s worth noting that the deal also involves the installation and commissioning of the electrical system.

This latest project is a testimony to the growing popularity of General Electric’s MV7000 drives systems developed for wide-ranging applications in the research and test industry.

General Electric, with a $101.6-billion market capitalization, currently carries a Zacks Rank #3 (Hold). The company is well-positioned to benefit from its portfolio-restructuring plans, expansion in the digital business, product innovation and efforts to deleverage the balance sheet in the quarters ahead. However, supply-chain constraints and inflationary pressure might adversely impact GE’s performance in the near term. 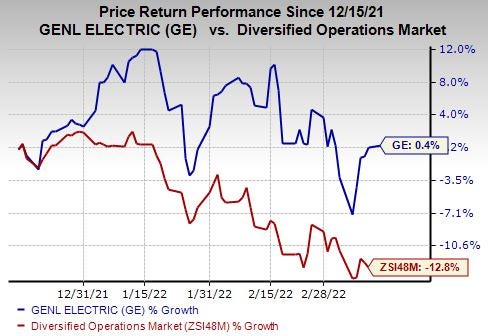 In the past three months, General Electric’s share price has gained 0.4% against the industry’s decline of 12.8%.

Some better-ranked companies are discussed below.

In the past 30 days, Franklin Electric’s earnings estimates have been raised 10.9% for 2022. FELE’s shares have lost 11% in the past three months.