McKesson Corporation (MCK - Free Report) is well-poised for growth, backed by strategic collaborations and strength in the distribution solutions segment.

The company — with a market capitalization of $43.65 billion — is a health care services and information technology company. It anticipates earnings to improve 11.8% over the next five years. The company beat earnings estimates in each of the trailing four quarters, the average surprise being 20.6%.

McKesson continues to actively pursue deals, divestitures and acquisitions to drive growth. Per the third-quarter fiscal 2022 earnings release, post an agreement in November 2021 to sell the remaining shares of GEHE Pharma Handel and Alliance Healthcare Deutschland joint venture to Walgreens Boots Alliance; McKesson completed the transaction on Jan 31, 2022. Apart from this, following a deal (made in December 2021) to sell its Austrian business to Quadrifolia Management GmbH, the company closed the transaction during the aforementioned period.

The company is a major player in the pharmaceutical and medical supplies distribution market. The Distribution Solutions segment caters to a wide range of customers and businesses and stands to benefit from increased generic utilization, inflation in generics, courtesy of several patent expirations in the next few years, and an aging population. 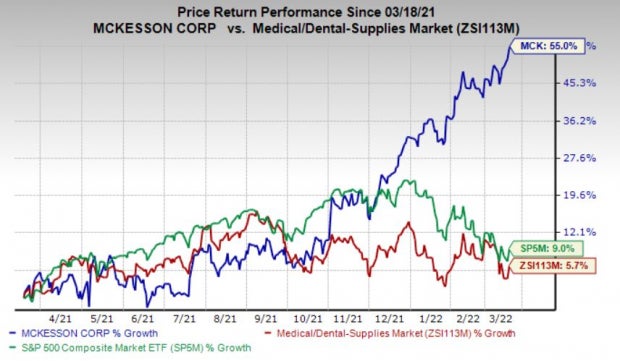 Again, through Jan 31, the company successfully distributed more than 370 million COVID-19 vaccines on behalf of the U.S. government, including vaccine distribution in the United States and related to the U.S. government’s international donation mission. In fact, in January, the United States government extended the existing COVID-19 vaccine distribution contract through July of 2022 (approximately in line with McKesson’s first-quarter fiscal 2023).

The company continues to reap benefits from COVID-19-related programs in Canada and European operations. Through December, McKesson distributed more than 81 million vaccines to administration sites in select markets throughout these geographies.

For fiscal 2022, the Zacks Consensus Estimate for revenues is pegged at $261.47 billion, indicating an improvement of 9.8% from the year-ago period’s reported figure. The same for adjusted earnings per share stands at $23.92, suggesting growth of 38.9% from the prior-year reported figure.

AMN Healthcare surpassed earnings estimates in each of the trailing four quarters, the average surprise being 20%. The company currently sports a Zacks Rank of 1 (Strong Buy). You can see the complete list of today’s Zacks #1 Rank stocks here.

Henry Schein beat earnings estimates in each of the trailing four quarters, the average surprise being 25.5%. The company currently carries a Zacks Rank #2.

Patterson Companies surpassed earnings estimates in three of the trailing four quarters and missed once, the average surprise being 2.7%. The company currently carries a Zacks Rank #2.