1. American Airlines, currently carrying a Zacks Rank #3 (Hold), now expects its first-quarter revenues to decline roughly 17% from the first-quarter 2019 actuals, better than its previous outlook of a 20-22% fall. AAL decreased its first-quarter capacity growth outlook. The metric is expected to be down 10-12% from the 8-10% decline, anticipated earlier. First-quarter non-fuel unit cost is now expected to be up approximately 11-13% from the earlier projection of an approximate 8-10% increase. Fuel price per gallon is now expected in the $2.73-$2.78 range compared with the $2.41-$2.46 band anticipated earlier. Current-year and next year’s capexes are projected to be $2.7 billion and $2.9 billion, respectively.

2. Delta now expects March-quarter revenues to be 78% of the first-quarter 2019 actuals compared with the prior expectation of revenues being in the 72-76% range. Driven by strong air-travel demand in spring and summer, DAL expects to generate positive free cash flow in first-quarter 2022.  Moreover, DAL expects pre-tax profit in March with high fuel costs being negated by stronger revenues. However, DAL still expects to incur a pre-tax loss in the March quarter. With oil price escalating, Delta now anticipates an adjusted fuel price of $2.80 per gallon compared with the previously expected range of $2.35-$2.50. Capacity in the March quarter is now expected to be roughly 83% of the first-quarter 2019 actuals (earlier expectation was in the 83-85% range). Also, Delta’s management did not announce any new fuel surcharges in this era of rising fuel costs.

3. Per United Airlines’ management, air-travel demand was better than expected after the peak period of omicron cases. As a result of this strong demand scenario, bookings (systemwide) for travel have improved nearly 40 points since the first week of 2022. In another positive update, UAL management confirmed that business traffic has increased in excess of 30 points since the peak of the Omicron impact in January. UAL now expects first-quarter 2022 total operating revenues to be near the better end of the previous projection of a decline in the 20-25% range from the first-quarter 2019 reading.

4. Like other carriers, Southwest Airlines issued a better first-quarter 2022 revenue outlook. LUV now expects first-quarter operating revenues to be 8-10% below the first-quarter 2019 levels. The same is better than the prior anticipation of a 10-15% fall. Capacity is expected to be down 9-10% from the first-quarter 2019 actuals. The same indicates a marginal decrease from the earlier expectation of a 9% decline. Non-fuel unit costs are now expected to increase in the 20-24% range from the first quarter 2019 actuals (previous guidance called for an increase in the 17-21% range). Due to LUV’s multi-year fuel hedging program aimed at providing insurance against spikes in jet fuel prices like the current scenario, the fuel cost per gallon guidance stays the same between $2.25 and $2.35. Load factor (% of seats filled by passengers) is still expected in the 75-80% band.

5. Copa Holdings’ traffic, measured in revenue passenger miles (RPMs), declined 13% to 1.42 billion in February 2022 from the comparable period’s reading in 2019. The downside was primarily due to the coronavirus-led lower air-travel demand than the pre-pandemic levels (2019). Due to tepid demand, capacity, measured in available seat miles (ASMs), fell 9.8% from the 2019 level to 1.76 billion. With traffic declining more than the amount of capacity contraction, load factor deteriorated 290 basis points to 80.7% in February. 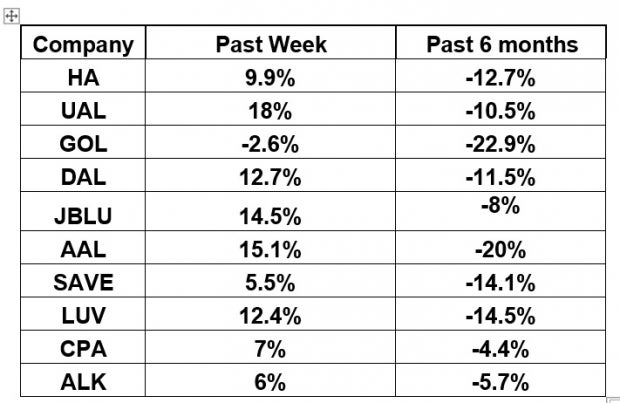 Stay tuned for the usual news updates on this domain.