Ford Motor (F - Free Report) recently stated that its vehicle production and orders in Europe have been badly impacted by the global semiconductor shortage and the armed conflict in Ukraine.

The auto giant has temporarily halted operations at its German plants in Saarlouis and Cologne, forced primarily by the global chip shortage. It has also suspended new orders for the S-Max and Galaxy vehicles built in Valencia, Spain. However, Ford’s existing orders for both products will be fulfilled.

Moreover, the ongoing Russian invasion of Ukraine has led to the inadequacy of parts at a Volkswagen (VWAGY - Free Report) plant in Poland that manufactures Ford's Tourneo Connect vehicle, causing a temporary production hiatus. Ford has said that it is closely monitoring the situation along with Volkswagen.

Supply issues in the wake of the Ukraine conflict have forced Ford to offer consumers the Focus car with a smaller, 8-inch dashboard screen instead of the larger 13.2-inch SYNC4 screen that was part of the recently updated features. Supply of the larger screen is being shifted to a new location in Europe, and until then, only the smaller screen will be in the market.

Despite the chip woes, Ford emerged as the best-selling automaker in the United States in fourth-quarter 2021.

A strong vehicle mix supported by F-series trucks and SUV models, including Escape, Explorer, Expedition, EcoSport and Edge, among others, is expected to bolster the company’s revenues. The new Bronco SUV and Maverick pickup is also getting a great reception from customers. The robust BEV lineup — with Mustang Mach-E, E-Transit and F-150 Lightning — augurs well. Mustang Mach-E is already the second best-selling electric SUV in the United States, and is boosting Ford’s sales. Shipment of E-Transit vans has begun, and the much-awaited F-150 Electric is expected to hit the market soon, driving the top line.

Ford’s shares have rallied 28.3% over the past year against the industry’s 1.8% decline. 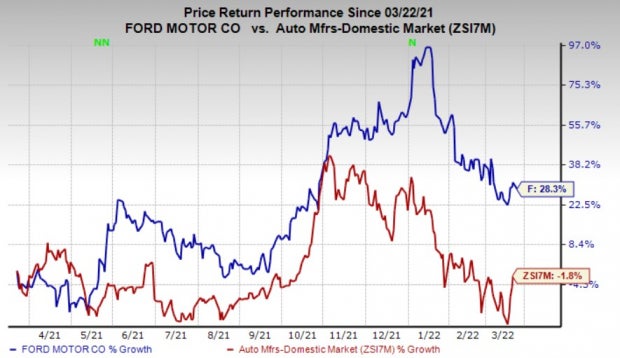 Harley-Davidson has an expected earnings growth rate of 1.9% for the current year. The Zacks Consensus Estimate for its current-year earnings has been revised around 21.7% upward in the past 60 days.

Harley-Davison’s earnings beat the Zacks Consensus Estimate in all the trailing four quarters. HOG pulled off a trailing four-quarter earnings surprise of 77.59%, on average. The stock has rallied 16.2% over the past year.

Tesla has an expected earnings growth rate of 40.7% for the current year. The Zacks Consensus Estimate for current-year earnings has been revised around 10.3% upward in the past 60 days.

Tesla’s earnings beat the Zacks Consensus Estimate in all of the trailing four quarters. TSLA pulled off a trailing four-quarter earnings surprise of 33.26%, on average. The stock has rallied 39.1% over the past year.