Valued at $318.9 million, the contract is expected to get completed by Jan 31, 2026. In particular, the modification under this contract offers the option to add 308 Joint Air-to-Surface Standoff Extended Range missiles with containers.

Work related to this deal will take place in Orlando, FL and Troy, AL.

A Brief Note on JASSM

The JASSM is a long-range, conventional, stealthy, air-launched ground attack cruise missile designed for the Air Force and international partners with a range of 223-621.4 miles. JASSM was designed to destroy high-value, well-defended, fixed and re-locatable targets. The threshold integration aircraft were F-16, B-52, and F/A-18 E/F.

Increasing geopolitical and socioeconomic turmoil worldwide has prompted nations, both developed and developing, to expand their respective military arsenal with missiles constituting a significant portion of that inventory.

Notably, Lockheed’s JASSM is integrated on a handful of the U.S. Air Force's jets like B-1B, B-2, B-52, F-16 and F-15E. Internationally, JASSM is carried on the F/A-18A/B and the F-18C/D aircraft. Future integration efforts will focus on the U.S. and international versions of Lockheed Martin F-35 Lightning II fighter aircraft and other international platforms. This surely indicates the strong demand that this missile enjoys in the domestic as well as international defense space. The latest contract win is a further testament to that.

As one of the major missile makers in the United States, Lockheed Martin thus stands out among its peers and its Missiles and Fire Control unit has been witnessing solid top-line growth. Notably, in fourth-quarter 2021, revenues at its Missiles and Fire Control unit came in at $3.22 billion, increasing 12% year over year, driven by higher net sales for integrated air and missile defense programs, and tactical and strike missile programs.

Considering the latest contract win, we expect this unit of Lockheed to show similar solid performance in the days ahead.

Raytheon boasts a long-term earnings growth rate of 10.2%. The Zacks Consensus Estimate for its 2022 earnings implies an improvement of 12.2% from the 2021 reported figure.

Northrop boasts a long-term earnings growth rate of 6.2%. The Zacks Consensus Estimate for its 2022 sales suggests an improvement of 2.6% from the 2021 reported figure.

BA boasts a long-term earnings growth rate of 4%. The Zacks Consensus Estimate for its 2022 earnings suggests an improvement of 137.2% from the 2021 reported figure.

Shares of Lockheed have gained 24.4% in the past year against the industry's decline of 32.3%. 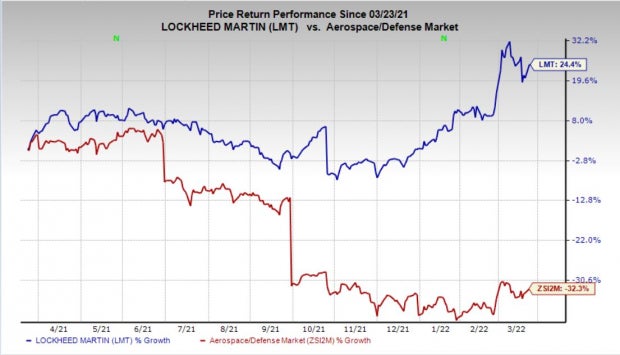