Volkswagen’s CEO Herbert Diess expects the company’s 2022 prospects to be hit by the Russia-Ukraine war in unforeseen ways. Diess notified that the lack of wire harness, which plays a key role in connecting a variety of vehicle components, has now overtaken microchips shortfall and has become a major supply concern.

Diess is of the view that aggravating logistical challenges and the shortage of key parts — especially wire harnesses — might force Volkswagen to cut its 2022 guidance if the company is unable to procure wiring harnesses from alternative sources in a month or so. Diess also anticipates the commodity markets to remain volatile until 2026. VWAGY’s CFO Arno Antlitz has already warned that high commodity costs will drive the prices of both ICE and electric vehicles.

Toyota temporarily suspended operations at a joint venture plant with FAW group in Changchun in China after a lockdown was imposed in the city last week in view of a surge in COVID-19 infections. Considering the restrictions on travel and movement, supplier status, and the safety of employees, the company arrived at this decision. The Changchun facility produces the RAV4 sports utility vehicle.

In January, TM halted activities at a joint venture plant in Tianjin, China, following the onslaught of the Omicron variant of coronavirus in the city. The hiatus resulted in a drop in its sales by about 20% in January from the year before. There has been an uptick in the sales figure by about 10% since then, but it is likely to be dented once more if operations at the Changchun plant remain suspended for a prolonged period.

LKQ inked a deal to divest the PGW Auto Glass (“PGW”) business to One Equity Partners. PGW is a distributor of aftermarket glass to the auto industry in North America. The business added $400 million to LKQ’s 2021 annual revenues and generated an EBITDA margin of 10%.

The financial terms of the deal are still kept under wraps. Subject to satisfactory closing conditions and regulatory approvals, the deal is scheduled for completion during second-quarter 2022. LKQ’s strategic acquisitions and divestment of non-core businesses are boosting its prospects.

The latest store in Johnson City brings the total EchoPark store count to 36. This excludes the 11 Northwest Motorsport pre-owned vehicle stores acquired through the RFJ Auto Partners buyout in December 2021. The EchoPark brand reached more than 30% of the U.S. population at 2021-end and aims for 90% U.S. population coverage by 2025. Sonic currently carries a Zacks Rank #2 (Buy). You can see the complete list of today’s Zacks #1 Rank (Strong Buy) stocks here. 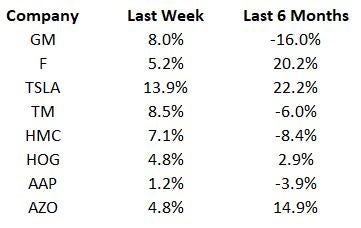 Industry watchers will keep a tab on February commercial vehicle registrations to be released by the ACEA this week. Also, stay tuned for how automakers make changes in operations in the light of increasing supply chain snarls amid geopolitical conflict and rising coronavirus cases. Watch out for usual news releases and updates from the auto industry.