The electric vehicle (EV) revolution is speeding up, with companies leaving no stone unturned to establish a strong foothold in this domain. Legacy automakers are stepping up e-mobility investment and setting ambitious targets to electrify their fleet. Last week, Ford (F - Free Report) revved up its EV push in Europe with the announcement of seven new green cars and a massive battery plant. The auto giant outlined a slew of products that include a new generation of seven all-electric vehicles to move toward a green future in Europe.

Top Stories of the Week Gone By

1. Ford announced seven new connected EVs in Europe by 2024. Riding on the successful launch of the all-electric Mach-E in 2021 and Mach-E GT this year, and the upcoming launch of the E-Transit in the next quarter, three new passenger vehicles and four new commercial vehicles are set to join the Ford family. Starting 2023, Ford will begin producing an all-new electric passenger crossover vehicle built in Cologne, with a second electric vehicle to be added to the production line-up in 2024. An electric version of Ford’s top-selling passenger vehicle in Europe — the Ford Puma — will be produced in 2024 in Craiova, Romania.

Ford targets to invest up to $2 billion in the Ford Cologne Electrification Centre facility for the development of new electrified passenger vehicles. The outlay also includes the establishment of a new battery assembly plant, which is scheduled to commence operations in 2024. The EV production at the facility is expected to increase to 1.2 million vehicles over a six-year time frame.

2. General Motors is geared up to deliver Cadillac Lyriq in May and has started production of the EV crossover yesterday. With a starting price of $59,990, Lyriq is the first vehicle in a new lineup of electric cars and SUVs that the brand plans to launch as part of its efforts to go all-electric by 2030. The production of Lyriq has commenced at a plant in Tennessee and the vehicle is expected to arrive at dealer lots by May. The brand will start taking official customer orders for the vehicle starting May 19. It anticipates a raging buyer count for the vehicle as Cadillac has already received 233,000 hand-raisers for the Lyriq. However, ascertaining the actual number of buyers is a matter of time.

GM noted that 96% of Cadillac dealers are equipped with the right infrastructure to sell EVs by May. General Motors is looking forward to breaking major grounds with its trailblazing vehicle. The firm’s Digital Retail Platform — an online tool that provides customers with a platform to learn about, shop for and buy vehicles in Cadillac’s EV portfolio — will encompass all its dealers from third-quarter 2022 to provide a holistic experience.

3. Honda announced an investment of $1.38 billion over six years to refurbish its manufacturing plants in Alliston, Ontario, as a part of its goal to reach zero emissions by 2040. The investment will place Honda in a leadership position in North America for the all-new 2023 CR-V Hybrid crossover. HMC’s total investments in Canadian facilities will be more than $6.5 billion since 1986, when it became the first Japan-based automaker to build a Canadian manufacturing unit.

The new hybrid products will reduce greenhouse gas (GHG) emissions by an additional 30% from the already low content of GHGs that Honda emits. The transition to new products aligns with Canada's overall GHG reduction goals and Honda's goal of carbon neutrality for its entire business by 2050. The enhancement of production lines will allow Honda to secure and generate a wide number of premium jobs in Alliston and throughout its extensive Canadian supplier network. These will holistically benefit the overall Canadian auto industry and employee communities.

4. Tesla announced an overnight price increase in the range of 5-10% throughout its entire lineup of vehicles in China and the United States. Inflationary pressure in raw materials and logistics, which have been exacerbated by the Russia-Ukraine war, has prompted the company to hike the prices of its vehicle models. TSLA currently carries a Zacks Rank #2 (Buy). You can see the complete list of today’s Zacks #1 Rank (Strong Buy) stocks here.

Tesla’s cheapest electric car — the Model 3-Rear Wheel Drive — is now priced at $46,990, up from $44,990. Its price increased by a whopping $2,000 within just a week. The price of Model 3 Performance was increased by $3,000. As for the Model Y, Tesla increased the base price by $2,000 and the price of the Performance version of the electric SUV by $3,000. Tesla’s flagship products, Model S and Model X, also saw a steep price rise. Model S and its performance version now cost an extra $5,000 each. Model X was spared from the previous price increases, but this time the electric SUV witnessed a price rise of $10,000. 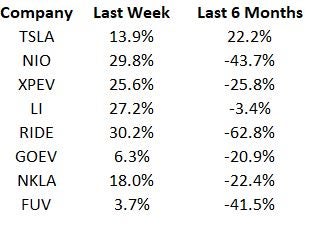 NICE Benefits From Expanding Portfolio and Partner Base