Reasons to Add Surmodics (SRDX) Stock to Your Portfolio

Surmodics, Inc. (SRDX - Free Report) has been gaining from consistent efforts to boost research and development (R&D) over the past few months. A robust first-quarter fiscal 2022 performance and solid prospects in the thrombectomy business are expected to contribute further. Yet, concerns related to stiff competition and reliance on third parties persist.

The renowned medical device and in-vitro diagnostics technology provider has a market capitalization of $592 million. Surmodics’ return on equity of 2.3% compares favorably with the industry’s negative return. SRDX’s earnings surpassed the Zacks Consensus Estimate in three of the trailing four quarters and missed the same in the other, with the average earnings surprise being 18.2%. 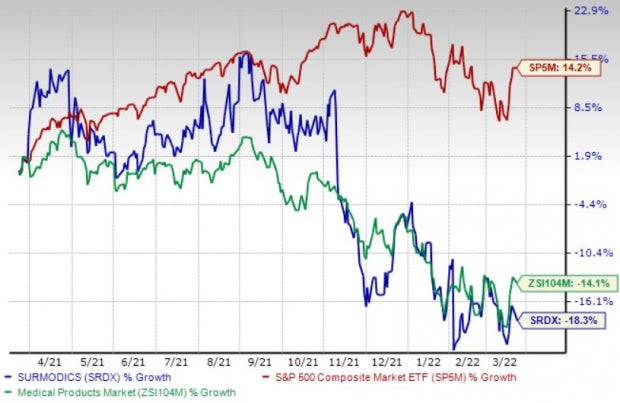 Efforts to Boost R&D: We are optimistic about Surmodics’ solid efforts to improve its R&D stature, which has been a key growth driver. During the first-quarter fiscal 2022 earnings call in February, Surmodics provided some updates regarding Sundance — below-the-knee sirolimus-coated balloon. Per the company, it completed the six-month data and follow-up visits in conjunction with the SWING first-in-human clinical trial during fourth-quarter fiscal 2021.

During its fiscal 2022 first-quarter earnings call, Surmodics confirmed that the Pounce arterial thrombectomy platform has been used to perform approximately 40 procedures in the United States. The company also confirmed that the Pounce arterial thrombectomy device is in the value analysis committee process in more than 15 hospitals.

Stiff Competition: Surmodics operates in a competitive and evolving field, and new developments are expected to continue at a rapid pace. Competition in the diagnostics market is highly fragmented and it faces an array of competitors in the product lines in which the company competes, ranging from large manufacturers with multiple business lines to small manufacturers that offer a limited selection of products.

Reliance on Third Parties: A principal element of Surmodics’ business strategy is to enter into licensing arrangements with medical device and other companies that manufacture products incorporating its technologies. The revenues that the company derives from such arrangements depend upon its ability or its licensees’ ability to successfully develop, obtain regulatory approval for, manufacture (if applicable), market and sell products incorporating Surmodics’ technologies.

Surmodics is witnessing a positive estimate revision trend for 2022. In the past 90 days, the Zacks Consensus Estimate for its earnings has narrowed from a loss of $1.27 to $1.10 per share.

The Zacks Consensus Estimate for the company’s second-quarter fiscal 2022 revenues is pegged at $24.4 million, suggesting a 30.3% fall from the year-ago reported number.

Henry Schein, carrying a Zacks Rank #2 (Buy) at present, has an estimated long-term growth rate of 11.8%. HSIC’s earnings surpassed estimates in the trailing four quarters, with the average being 25.5%. You can see the complete list of today’s Zacks #1 Rank (Strong Buy) stocks here.

Henry Schein has gained 35.5% compared with the industry’s 10.5% growth over the past year.

IDEXX has an estimated long-term growth rate of 13%. IDXX’s earnings surpassed estimates in the trailing four quarters, with the average being 18.6%. It currently carries a Zacks Rank #2.

AMN Healthcare has an estimated long-term growth rate of 16.2%. AMN’s earnings surpassed estimates in the trailing four quarters, with the average being 20%. It currently sports a Zacks Rank #1.

AMN Healthcare has gained 43.6% against the industry’s 54.7% fall over the past year.

What's in Store for One Stop Systems' (OSS) Q4 Earnings?