Quite a few regular pipeline and regulatory updates grabbed focus in the biotech sector this week. Importantly, updates on COVID-19 vaccines continue to be in the spotlight amid a resurgence in cases due to the emergence of a new variant called Deltacron.

Bristol Myers’ Gets Drug Approval: Bristol Myers Squibb (BMY - Free Report) announced that the FDA approved a new, first-in-class, fixed-dose combination of PD-1 inhibitor Opdivo (nivolumab) and relatlimab (novel LAG-3-blocking antibody) administered as a single intravenous infusion for the treatment of adult and pediatric patients 12 years of age or older with unresectable or metastatic melanoma (a kind of skin cancer).

The drug is approved under the brand name Opdualag.  The approval is based on positive results from the phase II/III RELATIVITY-047 study, which compared Opdualag (n=355) to Opdivo alone (n=359). Opdualag more than doubled median progression-free survival compared to Opdivo monotherapy. The FDA-approved dosing for adult patients and pediatric patients 12 years of age or older who weigh at least 40 kg is 480 mg nivolumab and 160 mg relatlimab administered intravenously every four weeks. The approval strengthens BMY’s growing and differentiated oncology portfolio, which also has Yervoy approved for melanoma.

Moderna’s Vaccine Update:  Moderna (MRNA - Free Report) announced that it submitted an amendment to the emergency use authorization (EUA) to the FDA for allowing the fourth dose of its COVID 19 vaccine in adults aged 18 years and above. The population includes adults who have already received an initial booster dose of any authorized COVID vaccine in the United States. Moderna’s filing with the FDA is based on data generated in the United States and Israel following the emergence of the Deltacron variant of the coronavirus. The recent surge in cases in some countries has fueled the demand for vaccines again.

The study did not meet its primary endpoint. ADAIR scored similarly to what was observed in an earlier proof-of-concept study. However, reference dextroamphetamine did not score as high as expected and as seen in the previous study, thus driving the lack of statistical significance. On a positive note, all pharmacodynamic secondary endpoints met with statistical significance.

Pipeline Progress by Vertex: Vertex Pharmaceuticals (VRTX - Free Report) announced that it will advance experimental therapy VX-147 into development for people living with proteinuric kidney disease mediated by two mutations in the APOL1 gene (AMKD).  Vertex will evaluate the safety and efficacy of VX-147 in a single study to evaluate the impact of VX-147, on top of standard of care, on kidney function and proteinuria in people with AMKD.  This randomized, double-blind, placebo-controlled phase II/III adaptive study will first evaluate two doses of VX-147 for 12 weeks to select a dose for phase III and subsequently evaluate the efficacy and safety of the single selected dose in the phase III portion of the study.

The primary endpoint of this study is the reduction in the rate of decline of kidney function as measured by estimated glomerular filtration rate (eGFR) slope versus placebo at approximately two years. Vertex targets a pre-planned interim analysis at week 48 evaluating eGFR slope in VX-147 versus placebo, supported by a percent change from baseline in proteinuria.  Vertex will seek accelerated approval of VX-147 in the United States for patients with AMKD assuming positive results from the interim analysis.

The Nasdaq Biotechnology Index has gained 8.39% in the past five trading sessions. Among the biotech giants, Moderna has gained 26% during the period. Over the past six months, shares of Moderna have lost 57.63%. (See the last biotech stock roundup here: Biotech Stock Roundup: NKTR Plunges on Study Failure, MRNA Offers Updates & More) 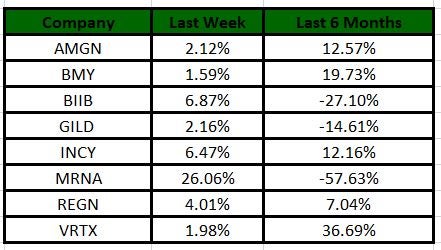 Chewy (CHWY) Lined Up for Q4 Earnings: What's in the Cards?