The European Automobile Manufacturers Association (“ACEA”) released data for commercial car registrations made in February 2022. New car registrations in Europe witnessed a year-over-year decline of 15.7% to 131,874 units. Sales in four key markets — namely France, Spain, Italy and Germany — witnessed losses. While Spain and France saw a double-digit decline of 23.3% and 21.4%, registrations in Germany and Italy declined 8.1% and 4.8%, respectively.

Chip crisis woes, compounded by the Russia-Ukraine war, continue to hurt automakers. Last week, Ford (F - Free Report) stated that vehicle production and orders in Europe have been badly impacted by the global semiconductor shortage and the armed conflict in Ukraine. The auto giant has temporarily halted operations at its German plants in Saarlouis and Cologne, forced primarily by the global chip shortage. It has also suspended new orders for the S-Max and Galaxy vehicles built in Valencia, Spain. Ford’s close peer General Motors (GM - Free Report) has also planned to suspend operations at its pickup truck factory in Ft Wayne, Indiana, for two weeks next month amid the shortfall of computer chips. The Ft Wayne plant will remain shut from Apr 4-15.

Meanwhile, Ford and General Motors also issued a recall of some of their models last week on issues related to damaged parts or certain features that compromise the safety of other drivers on the roads.

Recap of the Week’s Major News

Winnebago reported second-quarter fiscal 2022 (ended Feb 26, 2022) adjusted earnings per share of $3.14, surpassing the Zacks Consensus Estimate of $3.06 and surging 48% year over year. This outperformance can be attributed to higher-than-anticipated revenues from the Towable segment. This recreational vehicle maker reported revenues of $1,164.7 million for the quarter under review, outpacing the Zacks Consensus Estimate of $1,002 million. The top line also grew 38.7% year over year.

Oshkosh’s fully-owned subsidiary, Oshkosh Defense, received an order from the USPS for Next Generation Delivery Vehicles (NGDVs). The initial order for 50,000 NGDVs is valued at $2.98 billion. Preparations at the South Carolina facility are underway, and new recruitment has already begun.

Oshkosh Defense will produce zero-emission battery electric vehicles (BEV) and internal combustion engine vehicles that reduce fuel dependency and emission for the USPS in its Spartanburg, SC facility. The first order consists of a minimum of 10,019 BEVs. The NGDV contract allows room to increase the percentage of BEV production even after an order is placed, once funding is provided. OSK is enthusiastic about the order as it will empower the firm to build modern, safe and dependable vehicles for the carriers. Significant program wins in Oshkosh’s Defense segment offer long-term growth visibility.

AutoZone increased its share buyback authorization again by $2 billion. Last year, the company authorized an additional buyback of $1.5 billion of its common stock thrice. Since the inception of the buyback program in 1998, AutoZone has authorized $31.2 billion in stock repurchase, including the latest amount.

In fiscal 2021, the firm repurchased $3.4 billion of its outstanding shares. It has bought back close to 90% of outstanding shares since 1998. AutoZone repurchased $1.6 billion shares in the last reported quarter. At the end of second-quarter fiscal 2022, AZO had more than $958 million remaining under the share repurchase program. The latest buyback boost is in line with AutoZone’s commitment to boost shareholder value. The company’s disciplined capital allocation approach to reinvest in the business and engage in meaningful investor-friendly moves is laudable.

Ford announced that it is recalling nearly 215,000 pickup trucks SUVs in the United States and Canada on issues of brake fluid leaks that can cause longer stopping distances. The U.S. National Highway Traffic Safety Administration (NHTSA) stated that fluid could leak from the brake master cylinder of the vehicle. Ford has confirmed four low-speed crashes, but there aren’t any injuries yet.

The recall covers the F-150 pickup models from 2016 through 2018 as well as Ford Expedition and Lincoln Navigator SUVs from 2016 and 2017. Per official documents, dealers will restore the master cylinder and front brake booster if needed. Vehicle owners will be notified by letters, beginning Apr 25. The present recall marks Ford's third for the same problem, with the previous ones having occurred in 2016 and 2020.

General Motors also announced that it would recall an estimated 740,000 SUVs since the headlights are too bright and have been a cause of concern for other vehicles on the road. According to reports, certain models of GMC Terrain SUVs from 2010 through 2017 are impacted.

The NHTSA stated that headlight glares reduce visibility for other drivers and increase the chances of a crash. General Motors is yet to come to a mitigating measure for the problem. Affected customers will be notified via letters starting Apr 23. GM currently carries a Zacks Rank #3 (Hold). You can see the complete list of today’s Zacks #1 Rank (Strong Buy) stocks here. 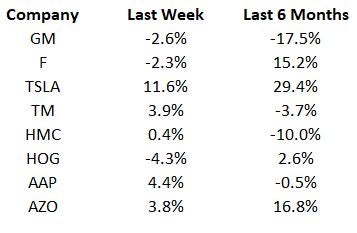 Stay tuned for how automakers make changes in operations in the light of increasing supply chain snarls amid geopolitical conflict and rising coronavirus cases. Watch out for usual news releases and updates from the auto industry.

What to Expect Ahead of BlackBerry's (BB) Q4 Earnings Release