General Motors (GM - Free Report) has announced that it will be putting the shutters down for its pickup truck factory in Ft Wayne, IND, for two weeks next month as the company is facing a severe shortage of computer chips.

The Wayne plant will remain closed between Apr 4 and Apr 11. At present, it is running on three shifts per day, manufacturing Chevrolet Silverados and GMC Sierra light-duty pickups. Since the plant employs more than 4,000 blue-collar workers, it is a matter of concern.

General Motors reported that all of its North American assembly plants have at least one shift running since Nov 1, 2021. Throughout this global crisis, GM has routed most of its semiconductor purchases to pickup trucks and large SUV factories as they qualify for GM’s most profitable vehicles.

Despite the grim situation, the automaker is optimistic that it can tide over the chip crisis. The scenario was expected to improve, but probable shortages of rare earth metals caused by the Russia-Ukraine war is an added worry. Uncertainty and unpredictability loom large in the semiconductor supply base, but GM is actively working to come up with measures.

The computer chip shortage that has been irking the auto and other industries for a long time has its roots in the pandemic in early 2020. As U.S. auto manufacturers had to halt production and close their factories to check the spread of the virus, and some parts companies had to cancel orders for semiconductors, the chip deficiency crept in and now threatens production even for major auto giants like GM.

With the pandemic forcing people to stay indoors, there was a demand surge for gaming consoles and gadgets with a high dependency on computer chips. Since electronic goods demand skyrocketed, the chip makers shifted their production base to these goods, thus creating a shortage of weather-resistant automotive-grade chips once auto production resumed.

The severe onslaught of the second wave of the pandemic that hit Asian countries like Malaysia further worsened the problem as chips are finished in these countries.

Analysts expect the chip shortage to tone down in the second half of this year, but not return to near-normal levels until 2023. 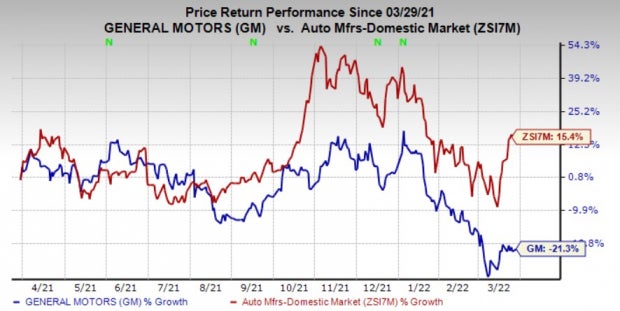 Harley-Davidson has an expected earnings growth rate of 2.2% for the current year. The Zacks Consensus Estimate for its current-year earnings has been revised around 28.1% upward in the past 60 days.

Harley-Davison’s earnings beat the Zacks Consensus Estimate in all the trailing four quarters. HOG pulled off a trailing four-quarter earnings surprise of 77.6%, on average. The stock has gained 6.1% over the past year.

LCI Industries has an expected earnings growth rate of 27.8% for the current year. The Zacks Consensus Estimate for current-year earnings has been revised around 16% upward in the past 60 days.

LCI Industries’ earnings beat the Zacks Consensus Estimate in three of the trailing four quarters and missed the same in the other one. LCII pulled off a trailing four-quarter earnings surprise of 12.9%, on average. The stock has declined 18.6% over the past year.

Tesla has an expected earnings growth rate of 42% for the current year. The Zacks Consensus Estimate for current-year earnings has been revised around 11.3% upward in the past 60 days.

Tesla’s earnings beat the Zacks Consensus Estimate in all of the trailing four quarters. TSLA pulled off a trailing four-quarter earnings surprise of 33.3%, on average. The stock has risen 74.6% over the past year.