Huntsman Corporation (HUN - Free Report) announced that its board has authorized a doubling of its current share repurchase program to $2 billion from $1 billion.

The company has already bought back $102 million worth of shares as of Dec 31, 2021 under the original program. The additional $1 billion of authorized repurchases ($1.9 billion in total) represents roughly 25% of Huntsman's market capitalization as of Mar 25, 2022. Huntsman had $2.5 billion in liquidity and a net debt to adjusted EBITDA leverage ratio of 0.4x at the end of last year.

The share repurchases under the new $2-billion authorization might be made on the open market. Huntsman stated that based on current market conditions, it plans to repurchase roughly $1 billion of the now remaining $1.9 billion in stock this year.

Shares of Huntsman have increased 30.1% in the past year compared with 2.1% growth of the industry. 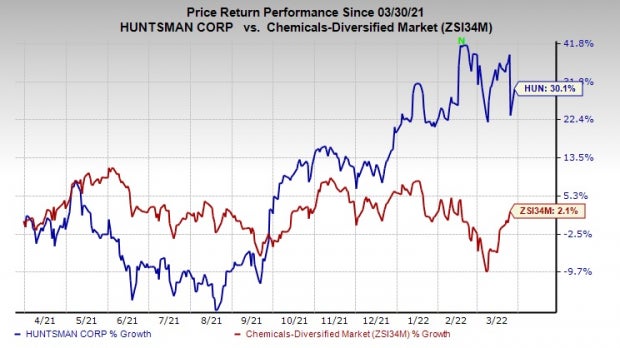 Huntsman recently announced an updated outlook for first-quarter 2022. The company now anticipates adjusted EBITDA for the quarter to be at or greater than the high end of the earlier-announced guidance of $350-$380 million. This company revised the guidance after reviewing February results and the developing business trends in March.

The improved updated guidance is led by continued momentum in the Performance Products segment, and to a lesser degree, in Advanced Materials. In the Polyurethanes segment, headwinds in the European region are being masked by strength in North America and Asia.

Mosaic has a projected earnings growth rate of 125% for the current year. The Zacks Consensus Estimate for MOS' current-year earnings has been revised 33.3% upward in the past 60 days.

Mosaic’s earnings beat the Zacks Consensus Estimate in three of the last four quarters while missing once. It has delivered a trailing four-quarter earnings surprise of roughly 3.7%, on average. MOS has rallied around 116.9% in a year and currently sports a Zacks Rank #1 (Strong Buy). You can see the complete list of today’s Zacks #1 Rank stocks here.

AdvanSix has a projected earnings growth rate of 64.8% for the current year. The Zacks Consensus Estimate for ASIX’s current-year earnings has been revised 58% upward in the past 60 days.

AdvanSix’s earnings beat the Zacks Consensus Estimate in three of the trailing four quarters, the average surprise being 23.6%. ASIX has surged 91.1% in a year. The company sports a Zacks Rank #1.

Allegheny’s earnings beat the Zacks Consensus Estimate in each of the trailing four quarters, the average surprise being 127.2%. ATI has rallied around 27.2% over a year.