Barclays PLC (BCS - Free Report) will incur an estimated £450-million loss and delay share buybacks for issuing structured products in excess of what it had registered for sale. Per a statement issued on Monday, Barclays, in August 2019, had registered with U.S. regulators for the sale of investment products worth up to $20.8 billion but ended up issuing products worth $36 billion.

The bank has said that “securities offered and sold under its U.S. shelf registration statement during a period of approximately one year exceeded the registered amount.”

Notably, a shelf registration is an agreement with regulators that enables finance firms to issue securities without applying for approval each time. It allows for a series of issuances without requiring further prospectuses to be filed.

Because of this error, Barclays will have to repurchase the affected securities (called the rescission offer) at their original price.

The bank currently estimates that the error will require it to take a hit of £450 million. Also, its share buyback plan of £1 billion, which was originally expected to start in the first three months of 2022, will now begin in the second quarter.

Barclays’ Monday statement also explains why the bank decided to halt the sales and issuance of a pair of major exchange-traded notes (ETNs) in the United States.

On Mar 14, Barclays announced the suspension of any further sales from inventory and issuances of each iPath Pure Beta Crude Oil ETNs and the iPath Series B S&P 500 VIX Short-Term Futures ETNs.

The bank’s Monday statement proves that the suspension is not a result of the crisis in Ukraine and does not have anything to do with the market dynamics in the underlying index components. The reason behind the suspension is that Barclays does not currently have sufficient issuance capacity to support the sale or any further issuances of the ETNs.

Nevertheless, Barclays is expected to file a new automatic shelf registration statement with the Securities and Exchange Commission as soon as possible. Also, the bank remains committed to its structured products business in the United States.

Over the past year, shares of BCS have lost 22% against 8.5% growth of the industry. 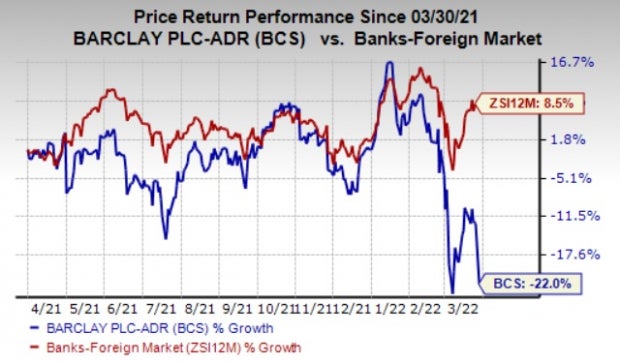 Malpractices by Other Firms

Several banks continue to encounter legal probes and have been charged with huge sums of money for business malpractice.

A unit of The Bank of New York Mellon Corporation (BK - Free Report) has been charged with a record fine and a reprimand by the Central Bank of Ireland. Per a recent article by Bloomberg, the company broke the rules on outsourcing fund administration services and provided “inaccurate and incomplete information” to the regulators.

BNY Mellon Fund Services DAC admitted to the breaches, which took place between July 2013 and December 2019. It has been fined €10.78 million ( $11.8 million) for 16 regulatory breaches. The penalty was reduced from €15.4 million as the company decided to settle.

The Central Bank of Ireland’s director of enforcement, Seana Cunningham, said that BNY Mellon “failed to act with expediency, transparency and openness even once it was aware that there were further issues with its outsourcing arrangements.”

Earlier this month, Deutsche Bank AG (DB - Free Report) agreed to prolongate the term of an existing independent compliance monitor until February 2023, after the U.S. Department of Justice (DOJ) prosecutors detected that the bank breached the terms of a deferred prosecution agreement (DPA) by not timely revealing a misconduct complaint on environmental, social and governance-related information in its asset-management arm, DWS.

Per a Financial Times article, Deutsche Bank had signed a DPA with the DOJ in 2021. As part of the settlement related to the bank’s alleged manipulative commodities trading and bribery practices, DB had agreed to notify the DOJ about potential legal issues at its earliest knowledge of the same.