Reasons to Retain Ecolab (ECL) Stock in Your Portfolio For Now

Ecolab Inc. (ECL - Free Report) is well poised for growth in the coming quarters, backed by its solid product portfolio. A robust fourth-quarter 2021 performance, along with its strong business, is expected to contribute further. Data security threats and compliance risks persist.

The renowned water, hygiene and infection prevention solutions and services provider has a market capitalization of $51.05 billion. It projects 12.7% growth for the next five years and expects to maintain its strong performance. Ecolab’s earnings surpassed the Zacks Consensus Estimate in three of the trailing four quarters and missed the same in the other, the average earnings surprise being 2.5%. 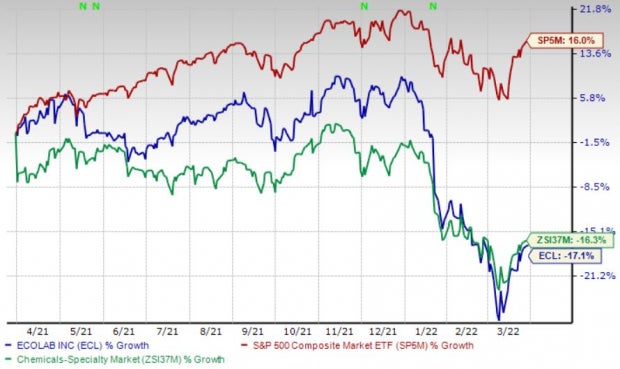 Solid Product Portfolio: We are upbeat about Ecolab’s product launching spree over the past few months. During its fourth quarter 2021 earnings call in February, Ecolab confirmed that its recent programs, including Ecolab Science Certified and net zero, have been favorably impacting the company’s business.

The company, during the fourth-quarter earnings release, confirmed that it had launched a strong innovation pipeline and further improved its productivity as it leveraged its digital investments.

Strong Business: Ecolab’s consistent delivery of considerable earnings growth despite the current challenging business environment continues to impress. One can derive comfort from the company's large base of recurring revenues, its industry-leading technologies, as well as excellent field service to support long-term growth. Management remains optimistic regarding improvement in its ability to attract new customers, and opportunities for greater customer penetration through new product development.

Strong Q4 Results: Ecolab’s solid fourth-quarter results buoy our optimism. The company registered robust year-over-year upticks in both the top and bottom lines, along with solid performances across the majority of its segments. Strong volume and pricing momentum are also encouraging. Ecolab’s new business wins, innovation pipelines and new focus areas are well-positioned to drive growth and its global leadership. The company’s digital capabilities are also continuing to broaden, develop and add competitive advantages, which are encouraging.

Data Security Threats: Ecolab relies largely upon information technology systems and infrastructure to operate its business. The size and complexity of the company’s information technology systems make them potentially vulnerable to failure, malicious intrusion and random attack. Acquisitions have resulted in further de-centralization of systems and additional complexity in Ecolab’s systems infrastructure.

Ecolab is witnessing a negative estimate revision trend for 2022. In the past 90 days, the Zacks Consensus Estimate for its earnings has moved 11.5% south to $5.33.

The Zacks Consensus Estimate for the company’s first-quarter 2022 revenues is pegged at $3.21 billion, suggesting an 11.2% improvement from the year-ago quarter’s reported number.

AMN Healthcare has gained 43.6% against the industry’s 53.9% fall over the past year.

IDEXX has gained 13.4% compared with the industry’s 0.3% rise over the past year.

Henry Schein has gained 28.3% compared with the industry’s 7.9% rise over the past year.

Reasons to Retain ICF International (ICFI) in Your Portfolio