lululemon continues to benefit from various consumer trends. In this regard, the company’s athletic apparel category continues to outgrow overall apparel. The company is capitalizing on the importance of both physical retail and the convenience of online engagement. That being said, it continues to grapple with delays across the supply chain, mainly in regard to transporting its products through ocean freight. Incidentally, management is more heavily dependent on air freight. Despite the challenging macro environment, the company successfully achieved its Power of Three growth target before schedule.

lululemon’s fiscal fourth-quarter adjusted earnings of $3.37 per share beat the Zacks Consensus Estimate of $3.27 and increased 31% from $2.58 reported in the year-ago quarter. The metric improved 22% on a two-year compounded annual growth rate (CAGR) basis.

The Vancouver, Canada-based company’s quarterly revenues advanced 23% year over year to $2,129.1 million but missed the Zacks Consensus Estimate of $2,135 million. On a constant-dollar basis, revenues increased 23%. The company’s net revenues grew 21% in North America, while the same surged 35% internationally. Compared with the fourth quarter of fiscal 2019, net revenues improved 52%, reflecting a two-year CAGR of 23%.

In the company’s store channel, sales increased 47% year over year and 3% on a two-year CAGR basis. Management highlighted that productivity was slightly lower when compared with 2019 levels due to impacts from the Omicron variant that led to greater capacity constraints, restricted staff availability and fewer operating hours across some locations

Gross profit improved 22% year over year to $1,236.2 million. However, gross margin contracted 50 basis points (bps) to 58.1%, thanks to escalated air freight expenses. Gross margin expanded 10 bps from the fourth quarter of fiscal 2019. The expansion was a result of leverage on occupancy, product team, depreciation and DC costs. Also, favorable impacts from foreign currency translation were an upside.

Adjusted income from operations jumped 27% year over year to $592.0 million. Adjusted operating margin expanded 90 bps to 27.8%. The metric contracted 200 bps from the fourth quarter of fiscal 2019.

SG&A expenses of nearly $642 million increased from $544.8 million reported in the year-ago quarter. SG&A expenses, as a percentage of net revenues, came in at 30.2%, down from 31.5% reported in the prior-year quarter, owing to leverage in store channel. This was somewhat offset by higher investments in corporate SG&A. 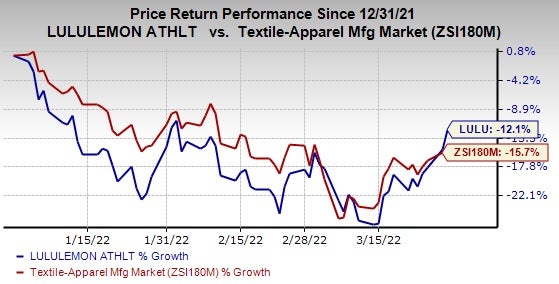 lululemon exited the quarter with cash and cash equivalents of $1,259.9 million and stockholders’ equity of $2,740 million. At the end of 2021, the company had $397.0 million remaining under its committed revolving credit facility.

In 2021, management repurchased 2.2 million shares for $812.6 million. As of Jan 30, 2022, the company had $187.5 million worth of stocks remaining under its share repurchase program. Management completed the remaining stock repurchases under the program in first-quarter fiscal 2022. On Mar 23, 2022, the company approved a new share buyback plan for up to $1 billion.

For the first quarter of fiscal 2022, management anticipates net revenues in the range of $1.525 billion to $1.550 billion, indicating growth of 24-26%. The company expects quarterly gross margin to be down 200-250 bps year over year. Earnings per share (EPS) are projected to be $1.38-$1.43 during the quarter. Management highlighted that its quarterly guidance takes into account adverse impact of almost 300 bps from air freight costs stemming from port congestion and capacity constraints.

The company’s shares have fallen 12.1% in the past three months compared with the industry’s decline of 15.7%.

Delta Apparel currently sports a Zacks Rank of 1 (Strong Buy). DLA has a trailing four-quarter earnings surprise of 21.3%, on average. Shares of DLA have increased 0.4% in the past three months. You can see the complete list of today’s Zacks #1 Rank stocks here.

The Zacks Consensus Estimate for Gildan Activewear’s 2022 sales and EPS suggests growth of 8.9% and 3.3%, respectively, from the corresponding year-ago reported figures. GIL has a trailing four-quarter earnings surprise of 66.6%, on average.

Columbia Sportswear currently has a Zacks Rank #2. COLM has a trailing four-quarter earnings surprise of 203.3%, on average. Shares of COLM have declined 2.9% in the past three months.

The Zacks Consensus Estimate for Columbia Sportswear's current financial-year sales suggests growth of 17.7% and the same for EPS indicates growth of 8.1% from the respective year-ago period's reported figures.